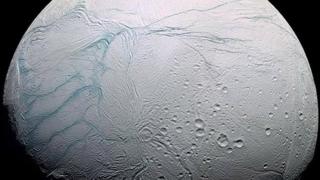 The Cassini probe may be about to make a dramatic end to its mission, but the information it has provided about Saturn and its moons is still throwing up plenty of fascinating facts for scientists.

The latest data sent back from the probe has made Nasa scientists believe that Saturn's ice-crusted moon Enceladus may now be the single best place to go to find life beyond our Earth.

So, before we get all Doctor Who, let's take a look at some top facts about the exciting moon for ET-spotters...

1. How big is Enceladus?

Enceladus is the sixth largest moon of Saturn. It is about 500 kilometres (310 miles) in diameter, making it pretty small. In comparison, the Earth is over 12,000 kilometres in diameter. 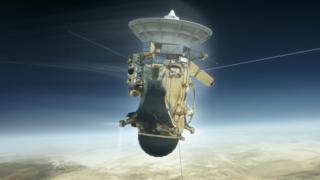 NASA
The Cassini probe that's been studying Saturn and its moons

2. How many moons does Saturn have?

Saturn has many different types of moons, some are very small, and one - Titan - is very, very large!

3. Why is it called Enceladus?

Enceladus is named after a giant from Greek mythology.

The name was decided by the son of the man who first discovered it, astronomer Frederick William Herschel. He spotted Enceladus all the way back in 1789, during the first use of his new telescope, which was the largest in the world at the time. 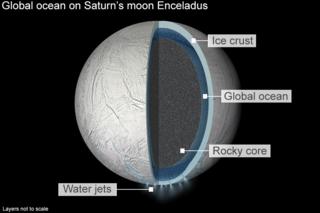 Enceladus is covered in a thick surface of ice. But it's what lies deep below this icy surface that has got scientists really excited!

It's thought a warm ocean flows below the surface, where the conditions to support life could exist. 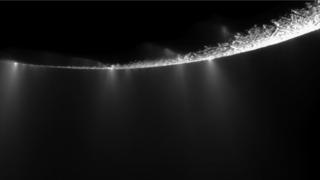 These plumes have provided clues about the planets inner-workings. The Cassini spacecraft conducted a fly-through of the plumes, helping to provide the data that has led scientists to believe the planet could hold life.

'Super Saturn' with giant rings is first outside solar system