Borussia Dortmund bus bombing: Everything we know so far 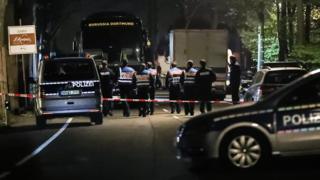 Three explosions have hit a bus carrying the German football team, Borussia Dortmund, to a Champions League match at their home stadium.

Player Marc Bartra had to have an operation after breaking a bone in his wrist. No other players were hurt.

Dortmund police said the vehicle was targeted deliberately but said it's too early to know whether it was a terrorist attack.

The match against Monaco has been delayed until 5.45pm (UK time) on Wednesday 12 April. 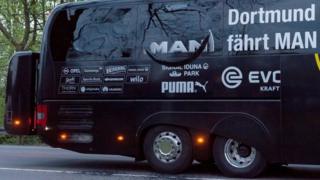 EPA
Pictures from the scene showed the bus's windows broken and tyres burst in the blasts.

Dortmund Police said there will be extra security and more police officers at the delayed match to make sure people are safe.

Click here for advice if anything in the news upsets you. 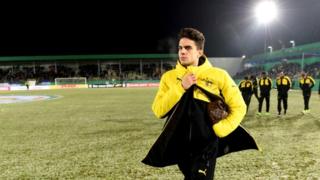 Fans at the 80,000-seater Signal Iduna Park in Dortmund, who had already arrived for the match, were told to stay there until it was safe to leave.

The stadium was later evacuated safely and police thanked the fans for their co-operation.

Borrusia Dormund and their fans used social media to help find the thousands of Monaco supporters, who had travelled to Germany for the match, a place to stay for the night.