Westminster attack: Tributes held for victims one week on 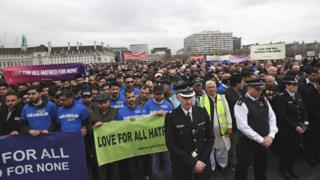 A minute's silence has been held to mark one week since the Westminster attack on 22 March, in which four victims and the attacker died.

Hundreds of people gathered on Westminster Bridge in London to pay their respects.

Similar events are being held in Sheffield, Birmingham, Leeds, Leicester and Manchester. 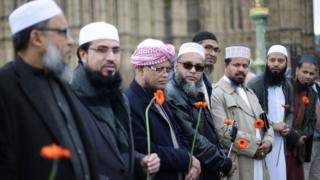 PA
Some people brought flowers; others held banners calling for peace and harmony

The attacker, 52-year-old Khalid Masood, killed three people when he drove his car into pedestrians walking along Westminster Bridge. 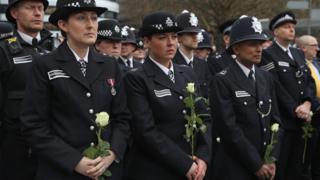 After crashing, Masood then attacked and killed PC Keith Palmer outside the Houses of Parliament, before being shot dead by police.

Attack in Westminster: What happened?