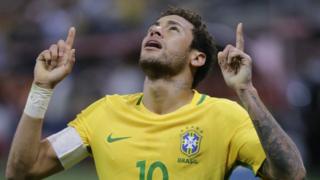 Brazil has become the first side to seal their place at the World Cup finals in Russia next year.

A 3-0 win over Paraguay, along with defeats for Argentina and Uruguay, means the team cannot finish lower than fourth in South American qualifying.

It is Brazil's eighth straight win under coach Tite.

How did Scotland, England and Northern Ireland do this weekend?

Glasgow: How slavery shaped our cities

Tell us how you are marking Black History Month

NI school closures: 'We've done it once, so we can do it again'