Your questions about the Westminster attack answered 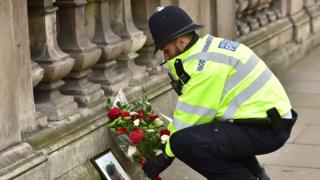 On Wednesday an attack took place outside the Houses of Parliament in London.

Sadly four people have died and around 40 people are injured.

The attacker was shot dead by armed police,

Lots of you have been in touch with us to ask questions about the attack, so we asked our reporter Leah to help answer some of them...

Is everyone else in London safe today? - from Year 8 at Isebrook SEN College

Leah: I grew up in London and I was in the capital after the 7/7 bombings - I quickly realised that the capital and its people are resilient. Today, adults will have gone back to work as normal - using the usual transport network they always did. And children will be back at school. There's also a huge Police presence not just around London but across the UK.

Have the police found any evidence relating to the attacker? - from Year 8 at Isebrook SEN College

Leah: There's an on-going Police investigation and security forces will be working really hard to find out everything they can about the attacker and why he carried this out. police say he was British born and influenced by international terrorism.

Why did it happen in London? - from Mr Bowden's year 4 class

Leah: London is the capital of the UK and Westminster is a really important place and sometimes a target for attacks. But London has some of the best security in place to try to stop things like this happening.

Why did the police officer shoot the attacker? - from Mr Bowden's year 4 class

Leah: The attacker tried to get into the Houses of Parliament and the police were trying to protect the people who work there.

Will this effect children in the future and potentially adults? How, if people are worrying, should they deal with this dilemma? - from Eve, 11

Leah: It's perfectly normal to feel upset or even worried when something like this happens. It's really important to talk to friends, teachers or family members about how you're feeling. Always remember that attacks like this are rare and the people who were affected will be getting all the help they need to recover from what's happened. If you are worried about anything in the news, check out our guide

How many police were there at the time? - from Lucas, 7

Leah: Police were very quick to arrive on the scene and many different officers have been involved from transport police to counter-terrorism officers. The Metropolitan police say that there are police officers on duty 24 hours a day around the Palace of Westminster, and the area around that is also patrolled by police at all times.

Attack in Westminster: What happened?