Send us your questions about what happened in Westminster 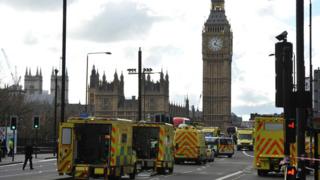 AFP/Getty
The emergency services reacted quickly to the attack.

On Wednesday an attack took place outside the Houses of Parliament in London.

The area around the Houses of Parliament was closed off after the incident to keep people safe, and many people were told to stay in their buildings until the police said it was safe for them to go home.

Sadly four people were killed in the attack, and around 40 people have been injured.

This includes a policeman who was outside Parliament, and people who were on Westminster Bridge.

The attacker was shot dead by armed police.

Some of you might have questions or might be feeling worried about what has happened in London - we will try to answer as many of your questions as possible.

This chat page is now closed, thank you for sending in your questions - the answers can be found here