Take a look at this tunnel blocked by mussels 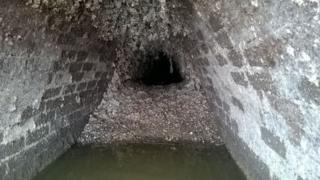 Take a look at this picture of a water tunnel in London - see anything unusual?

A team from Thames Water - the people who look after some of the pipelines in London - were doing a regular inspection on this pipe in Walthamstow Reservoir when they came across this mammoth blockage!

Nope its not a fatburg, its a group of zebra mussels!

The molluscs get their name from their stripy shells, and are usually found in freshwater lakes and rivers around Ukraine.

However sometimes they can cling onto boats and end up in there UK as well.

The team from Thames Water have said that work will soon start to remove the mussels and clear the pipe.