Why are nights and days different lengths over the year? 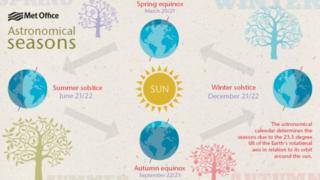 Met office
This handy diagram can help you to get your head around all the astronomical seasons.

Equinoxes and solstices are key dates in the calendar.

They are used to define the transitional periods between the seasons, so when winter changes to spring, summer to autumn and so on.

They are key dates in the journey of the Earth around the Sun.

The position of the Sun in relation to the Earth affects how long days and nights are.

September 22 is the autumn equinox.

June 21 is the summer solstice and the longest day of the year.

So what are equinoxes and solstices?

This happens when the sun is positioned exactly above the equator.

Equinox occur twice a year, once around the 20th of March which is the spring equinox and again around September the 22nd, known as the autumn equinox.

Simple right? Well there's a bit more to it...

So day and night are only NEARLY a totally equal length on the equinox.

The moment when day and night are truly of equal length occurs a few days before the spring equinox, and a few days after the autumn equinox.

This is called the equilux. 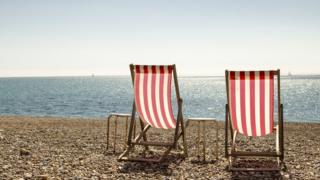 The summer solstice is the day when the Northern hemisphere experiences its longest period of daylight all year.

Winter solstice is the day when the Northern Hemisphere experiences its longest period of night all year.

Some far northern countries such as Iceland and Norway experience continuous daylight for months. This is because the Northern Hemisphere is tilted towards the sun, this can also result in increased sunlight and warmer temperatures.