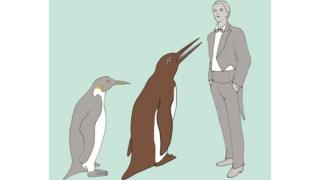 Gerald Mayr
This diagram shows (from left to right) an Emperor Penguin 1.2m, Waipara Giant Penguin 1.5m and a man who is 1.8m tall.

Scientists have found what they think could be the earliest remains of a penguin ever found.

It's thought the birds would have walked the earth around 61 million years ago.

The bones, found in New Zealand, show the birds belonged to a species that was bigger than today's penguins.

Researchers think the fossil penguin would have been around 1.5 metres tall which is bigger than the biggest penguin alive today, the Emperor penguin. 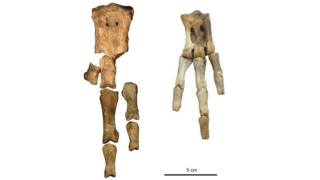 The new giant penguin lived at the same time as another penguin species that was already known to science.

The bones of this species, which is called Waimanu manneringi, are very different from that of the new giant fossil penguin.

This new discovery shows that penguins were around just four million years after dinosaurs went extinct.

Researchers think that earlier relatives, or the "penguin great-great-grandfather", could have been alive some 65 million years ago, when dinosaurs were still alive.

Penguins get special pipeline to help them cross road

Happy Feet! The penguin who got a new boot.