Six of them are in what's called the temperate zone, which is an area where the temperature is thought to be between 0 and 100 degree Celsius.

But only three are within the conventional "habitable" zone where life is considered a possibility. 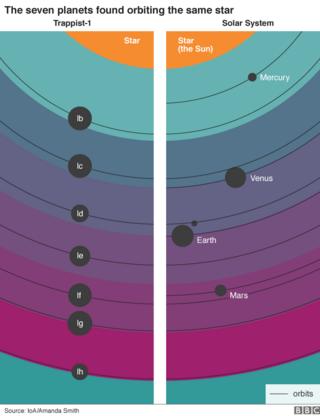 They say they need to look at them in detail to find out more, especially the outermost seventh planet which is located outside of the zone the six inner planets are in.

The findings have been published in the Nature journal.

What is an exoplanet? 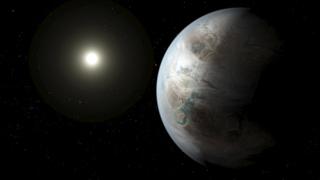 NASA
The exoplanet Kepler-452b was discovered earlier this year and has very close similarities to earth.

Exoplanets are planets that obit a different star than our Sun - in a different solar system to the one we are in.

Even though scientists thought for a long time that they must exist, it was only in 1992 that the first exoplanet was discovered.

Further work to look for other ones has turned up some exciting results more recently too.

Earlier in 2015, scientists discovered the exoplanet Kepler-452b, which was described as 'Earth's cousin' because of its close similarities to our planet.

Space experts say exoplanets are really important because they raise the possibility that other life could exist in other solar solar systems.

Meat and potato pie sent into space for science experiment

Cuddly toy missing after being launched to edge of space