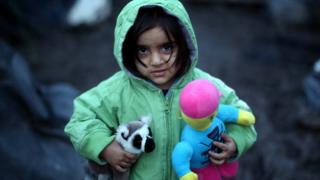 Getty Images
The UK parliament made a decision about how the UK could help child refugees, which was called the Dubs Amendment. Find out more about it below

Last year, Newsround reported many stories about the refugee crisis in Europe.

Millions of people - many of them children - were forced to leave where they lived because of fighting in the Middle East.

In particular, the conflict in Syria drove millions of people from their homes. It also meant lots of families got separated from each other.

Many travelled to Europe, in the hope that they might find a better life in a European country, with many hoping to come to the UK.

The leaders of European countries have had many discussions to try to decide how to deal with so many extra people, who are now in Europe but have nowhere to live.

Something called the Dubs Amendment formed part of how the UK said that it could help these refugees.

Find out more about what it is below.

What is the situation?

Thousands of refugees fleeing across Europe ended up in Calais in north France, in a refugee camp known as the Jungle (which has now been shut down). Many came from Syria.

This is because they hoped to cross over to England from there, to start a new life in the UK.

While the Jungle was being used as a temporary home for thousands of people, there was a lot of worry about their safety - especially for children.

Countries around Europe discussed how they were going to deal with all of these people who had nowhere to live and who were living in awful conditions in the Jungle.

Some countries made promises about how many refugees they were going to take from the Jungle to live in their countries.

The UK parliament made a decision about how the UK could help, which was called the Dubs Amendment.

There is a piece of EU law, called the Dublin III regulation, that says that families have a right to stay together.

This means that refugees have a right to go to join family members if they are legally in another country, so the family can be with each other.

This meant that refugees living in Calais who had family members in the UK had a right to apply to come over here to join them.

But there were many unaccompanied children in the Calais camp, who did not have families here.

So the UK launched a scheme to enable a number of unaccompanied children to come to live safely in the UK - even if they did not have a straightforward family link here.

It was called the Dubs Amendment. It was named after a man who led the scheme being introduced, called Lord Alf Dubs.

He was a child refugee himself when he was younger, as he came over to the UK from Czechoslovakia when it was occupied by the Nazis during World War II.

His father was Jewish, and so he and his family were in danger because the Nazis wanted to kill Jewish people. The UK gave him somewhere safe to live as a young boy.

The Dubs Amendment did not make a promise about how many children could come to the UK.

But Lord Dubs and his supporters said the UK could help about 3,000 refugee children.

Why is it being talked about now?

So far, around 200 children have come to the UK under the Dubs Amendment scheme.

But the government has recently announced that it will stop the scheme after another 150 are settled here.

They say that councils are not able to find homes for more children than this. 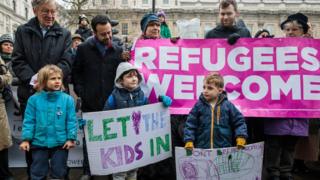 This means that 350 children will have come to the UK because of it - not 3,000, as Lords Dubs suggested was possible.

Many people think that the UK should let more children come to live here safely and that the government has not done what it said it would.

Lord Dubs himself said that by stopping the scheme like this, he felt the government had "gone back on their word".

But the government has said that the scheme only encourages more young people to make the dangerous journey across Europe in the hope they might be allowed to come to live here. 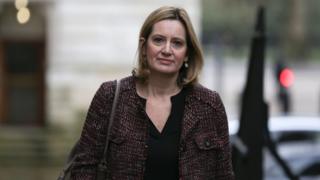 AFP/Getty Images
Home Secretary Amber Rudd, who is a member of the government, said the Dubs scheme "encourages people traffickers"

It has said that it is not giving up on these vulnerable children, because there are other schemes that can help them to come to the UK.

What happened to the 'Jungle' migrant camp?