NHS: What is the National Health Service, who uses it and how is it paid for?

Today the NHS, or National Health Service, is 73 years old.

To mark the occasion the Queen has awarded the NHS with the George Cross, which recognises "acts of the greatest heroism or of the most courage in circumstances of extreme danger".

The award comes during a challenging year for the health service as it responds to the coronavirus pandemic.

But what exactly is the NHS, how does it work and how did it get started?

Find out more about the NHS

A brief history of the NHS

The NHS is the health service that everybody in the UK can use when they become poorly or injured, to help them to get better.

It is 'free at the point of use', which means people can be treated for free when they are poorly.

It is paid for through taxes, which is money that UK adults pay to the government.

It includes doctors, nurses, surgeons, ambulance drivers, opticians, paramedics, midwifes (who help to deliver babies), psychologists and all sorts of other people whose job it is to make sure people stay healthy.

It started in 1948, as the government believed that everyone should be able to get healthcare - no matter how much or little money they had.

Before the NHS, people would usually have to pay to get help if they got ill.

Who can use it?

Everyone currently living in the UK can use the NHS if they are poorly.

However, depending on which UK country you live in, you may have to pay for medicines.

For example, in England, you will start to pay for prescriptions when you are 16, but in Scotland, Northern Ireland and Wales they are always free.

If you are not living in the UK, you can still walk into a hospital and get medical help - but you may have to pay for it. 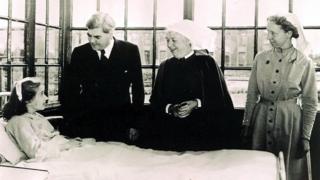 PA
Health Secretary Aneurin Bevan is responsible for launching the NHS in 1948. Here, he is seen talking to the NHS's very first patient - a 13-year-old girl called Sylvia Diggory at a hospital in Manchester
Who pays for the NHS?

It costs a lot of money to provide healthcare to the whole population.

To do this, the NHS is paid for by taxes collected by the government.

A little bit of money does come from other places - like the medicines that patients have to pay for in England and money from those who pay for NHS services.

The NHS has a fixed amount of money called a budget, which it can spend on services for the whole population - and it must decide very carefully how to spend that money.

Currently, many NHS services say they are struggling and they need more money to be given to them.

One of the issues is that we are living for longer than we used to, which means there are more elderly people. Older people are more likely to need the NHS to help to take care of them - and this costs money.

Who is in charge of it?

The NHS is an extremely large organisation, so lots of people are in charge of different parts.

The UK government does not run the NHS for the whole of the UK though.

It looks after the NHS in England. The governments in Scotland, Northern Ireland and Wales look after their own NHS.

Do all doctors work for the NHS?

The NHS provides healthcare that is free at the time you need it. However, you can pay for it too - for example, if you want to see someone quicker than the NHS is able to provide, there are other healthcare services.

This is called 'private healthcare' - and you have to pay for it.

There are doctors and nurses, and many other medical professionals, who work 'privately'.

This means they do the same job, but you have to pay to use their services at the time.

NHS 70th anniversary: 7 facts you may not have known