Calvapilosa: The spiky slug with hundreds of teeth 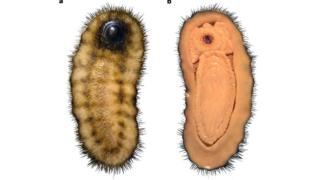 Jakob Vinther et al., 2017
How real does this look! The fossil scientists examined was in such good condition they were able to make this life-like reconstruction.

This is Calvapilosa, a prehistoric relative of modern sea slugs.

Researchers discovered it after looking back at some fossils found in the late 2000s in Morocco, North Africa.

Two of the fossils were in such good condition that the team were able to make this amazingly detailed reconstruction.

You can clearly see its small mouth filled with hundreds of teeth and the prickly spines which cover its body. 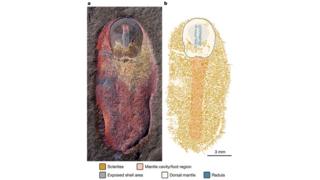 Jakob Vinther et al., 2017
This is a picture of the fossil showing all its different body parts.

This slug like creature also had a built in, helmet like, shell to keep it safe from predators.

It might look a little terrifying but it was only four inches long and scientists think it survived by eating algae off rocks.

Molluscs first appeared on earth around 520 million years ago, Calvapilosa is an ancient relative of modern molluscs.

A mollusc is a type of animal that doesn't have a spine, there are lots of different kinds including slugs, snails, oysters and squid.

Jakob Vinther who was the lead researcher on the project said "This discovery brings a neat solution to how the ancestor of all molluscs may have looked."