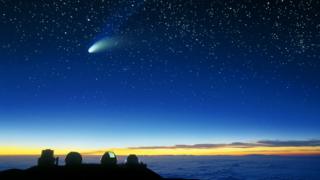 Ever looked at a shooting star and wondered what it was?

Is it a meteor, a comet or an asteroid?

Every day the Earth is bombarded with more than 100 tons of space dust and tiny objects no bigger than a grain of sand.

Around once a year, an asteroid the size of a small car enters the Earth's atmosphere - creating an impressive fireball - and burns up before reaching the surface.

So, we thought we'd take a closer look at some of the objects streaking through our skies at night, to find out a little bit more about them! 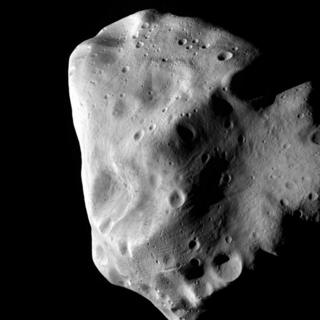 ESA/HO
Asteroids are usually lots of different shapes and are quite craggy - This one is called the Lutetia asteroid.

What is an Asteroid?

Asteroids are big chunks of rock which float though space and orbit the Sun.

They are much smaller than planets, and can vary in size.

The biggest called Ceres is around 940 km wide - that's twice as big as the Grand Canyon! - some of the smaller asteroids can be around six metres in size. 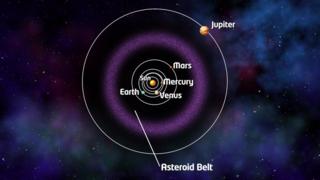 This map of our solar system shows where the main asteroid belt sits, in space.

There are lots of asteroids in our solar system, and most of them are in the main asteroid belt, which floats between Mars and Jupiter.

What is a Meteoroid?

Sometimes asteroids can bump into each other in space, and this can mean small pieces break off.

These smaller pieces of rock are called meteoroids.

Meteoroids can be as small as a grain of sand or as large as a metre across. 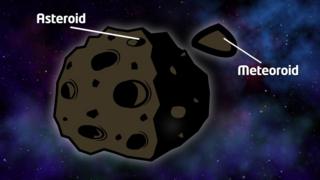 Meteoroids can break off from asteroids.

What is a Meteor?

If a meteoroid gets close enough to the Earth that it enters our atmosphere, it begins to burn up and fall to the ground.

This burning trail is known as a meteor.

They are usually bright in colour and leave beautiful trails of light in the sky.

Some people call them shooting stars, but they are aren't really stars, just tiny chunks of rock burning up in the Earth's atmosphere!

If a meteoroid rock doesn't completely burn up as it falls to Earth - the rock that is left behind is called a meteorite.

Although meteors and comets both create bright trails through our night sky, they are very different.

Nasa robot leaves us with one final photo of Mars

Who will be the first person on Mars?

What is a Comet?

Like asteroids, comets also float through space orbiting the Sun.

However, comets are made up of ice and dust, not rock - like a giant dirty snowball! 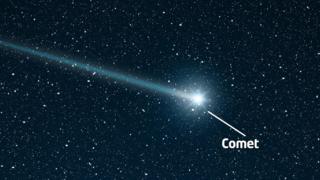 Some comets take a few years to travel around the Sun. However some take much longer and others only ever appear once.

As the comet moves towards the sun, the heat begins to melt the ice and dust - turning it from a solid to a gas.

This creates a beautiful, bright tail.

You can see a comet travelling through the sky when it is very far away from the Earth, however you can only see a meteor when it burns up in our atmosphere.

In 2014 the Rosetta spacecraft made history by being the first to land on a moving comet.

Information from Nasa and ESA

Comet to appear in UK skies

Geminid meteor shower 2021: How and where to watch it