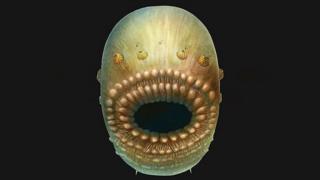 S Conway Morris / Jian Han
Researchers think that the creature used the cones on it's head to get rid of water that it took in when eating it's prey, much like a fish does with it's gills.

This creature looks very different from us, but scientists think it could be our oldest ancestor.

Researchers found fossils of the creature in China.

A special microscope was used to look at them because they were only the size of a grain of rice.

They decided that what they had found was an undiscovered species of animal, distantly related to humans.

This little sack like creature only had one major opening on its whole body, its mouth.

So how did it poo? Well researchers on the team think saccorhytus would probably have got rid of its waste through its mouth...yuck!

Saccorhytus lived about 540 million years ago and it's recent discovery has helped to fill gaps in group of organisms called deuterostomes, which we and some other creatures like starfish belong to. 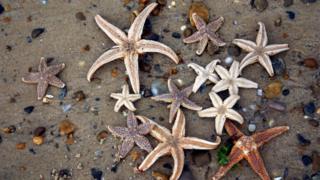 Deuterostomes include humans, star fish, sea cucumbers and a number of other animals who share similar features.

Humans and other deuterostomes are grouped together because of the way that our cells divide and split before we are born.

Evidence of these tiny organisms has been found in rocks dating back around half a billion years.

But now we actually know what they looked like.

Simon Conway Morris, one of the research team from the University of Cambridge said "To the naked eye, the fossils we studied look like tiny black grains, but under the microscope the level of detail is jaw-dropping. All deuterostomes had a common ancestor, and we think that is what we are looking at here."

VOTE: Are you bored of video chat?