Comments: Your views on President Trump's US travel ban 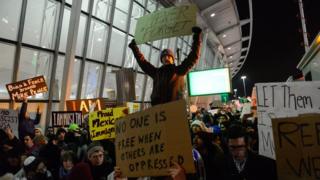 Stephanie Keith
Protests broke out at major US airports, including JFK in New York

President Donald Trump is continuing to back a ban on people from seven countries entering the United States despite mass protests against it.

The new rules, brought in on Friday, stop people coming to America from countries in the Middle East and Africa for 90 days. They include stopping Syrian refugees travelling to the US until further notice.

Mr Trump said the plans were about keeping America safe from terrorism, and said it was not a ban against Muslims.

There have been big protests against the ban across the country over the weekend.

We think the ban is wrong because these countries are in a bad situation and their people should be able to seek shelter here. President Trump says that it is not about religion but he keeps using the word Muslim, which sounds like it is about religion. Not all Muslim people are bad, there are more good people than bad people, so if we keep all the people out from those countries then we are keeping out a lot of good people.

I think Trump is very right to do what he is doing because it is going to better security in the USA and to stop crime!

I do not think it is right to ban people from different countries as it is not a good sign of welcoming others! Trump is also punishing others, for example Syrian refugees, who need a safe place to stay. He does not realise what he is completely doing to others than keeping America safe from terrorism. Rather than setting up rules quickly, he should think how it affects others!

I think it is wrong because even though he says he is doing it for safety, he is really being racist. He is a bad and dangerous president.

I think everyone should be allowed to travel wherever they want.

This is not acceptable. Trump may think this is correct for America but many more countries suffer from this ban. As well as this, America is one of the wealthiest countries so why not use that money to help those countries. I wouldn't do this despicable thing if I was him, would you?

We think Trump is trying to do the right thing but going about it completely wrong. Terrorists are extreme people who have been brainwashed into a certain way of thinking. Not all Muslims are terrorists so they shouldn't be treated like they are. If Trump was going to impose a ban like this, he should have held a referendum with all the American population to see if they wanted to do it or not. It is too big for one person to make this decision and cause so much controversy.

I disagree with President Trump's US travel ban because people should have the right to visit the country. He is being very mean.

I don't think it's right. It's not fair for other people just because where they are from because people need to go to America. They might be Muslim people living there and it's not fair for them to have to move house, get a new job and have to find a new school. I would be very sad.

I think he shouldn't because a war is happening in Syria so people escaping need shelter.

I think that he shouldn't be doing it. Everyone is the same even if they have a different religion.

I think he is just really mean. They are just regular people and they don't deserve to be treated differently.

I think this is not right what Trump is doing and it's kind of racist for Muslim people.

This chat page is now closed. Thank you for your comments