Millions of people will be celebrating Chinese New Year, also known as Lunar New Year, at the start of February.

It is one of the biggest events of the year for many East and South East Asian people and it will be marked by communities all over the world.

This year the celebration will begin on 1 February. The reason the new year falls at this time is because it marks the start of the lunar new year, which is when there is the start of a new moon. 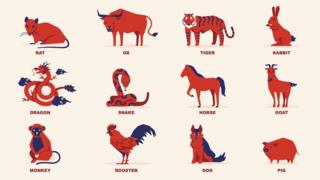 Getty Images
These are the 12 animals of the Chinese zodiac. Find out which one matches with the year you were born below!

This is different to the 'Gregorian' calendar that we traditionally use in the UK, which always starts on 1 January.

Because it depends on the Moon, the date of Lunar New Year actually changes each year, but it will always fall some time between 21 January and 20 February.

See how much you know about Chinese New Year with this quiz - and find out which lunar year YOU were born in here. 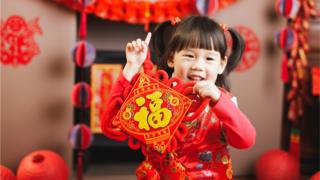 Chinese New Year is also known as the Spring Festival or the Lunar New Year.

People in lots of other Asian countries celebrate the lunar festival.

It is the most important celebration in the Chinese calendar.

In Chinese tradition, each year is named after one of 12 animals, which feature in the Chinese zodiac: Rat, Ox, Tiger, Rabbit, Dragon, Snake, Horse, Goat, Monkey, Rooster, Dog and Pig.

So the animals will have a year dedicated to them once every 12 years, in a cycle. 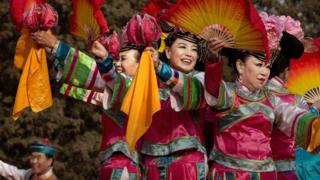 Getty Images
Here, performers dance on stage at a local fair in Beijing in China to mark the new year celebrations

Millions of people in China normally travel across the country in the lead up to the new year as they go to spend time with family.

Usually before the festivities begin, people clean their homes really well to make them ready for the celebrations.

Then, when New Year's Day comes, there is a tradition not to pick up a broom, in case you sweep the good luck for the New Year out of the door!

In China, schools and businesses can close for the first few days of the new year, so that everyone can spend time with their families.

People enjoy eating lots of delicious food, including noodle soup, which traditionally brings luck for the year ahead.

There are typically parades and performances, with people dressed in traditional clothes.

Fireworks are also set off, because it is thought that noise and lights will scare away any evil spirits for the coming months. 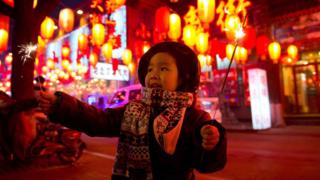 Getty Images
In Beijing, this girl is celebrating the lantern festival, which marks the end of celebrations

Adults might give red envelopes to children with money inside too.

The festivities continue for two weeks, finishing with a special lantern festival, which signals the end of the new year celebration period.

Chinese New Year: These children tell us how they celebrate

Chinese New Year: What is it and how will you be celebrating?