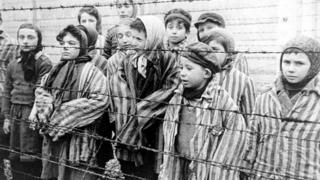 United States Holocaust Memorial Museum
This photo shows children who survived the Holocaust. Read below to find out more about what it was and why it's important to remember it

On 27 January every year, it is Holocaust Memorial Day.

It's a day for everyone to remember the millions of people who were killed, or whose lives have been changed, by an event in history called the Holocaust.

On this day we also remember the millions of people who were killed or have been affected by Nazi persecution and terrible crimes committed during conflicts in Cambodia, Rwanda, Bosnia and Darfur.

The Holocaust happened during the Second World War between 1941 and 1945.

How Jewish people were treated during the Holocaust

It refers to when the German Nazi party - led by Adolf Hitler - murdered six million Jewish people from countries across Europe in an attempt to wipe out the Jewish population.

The Jewish people had done nothing wrong. They were targeted simply because they were Jewish.

The Nazis also killed millions of other people just because of who they were. For example, Roma gypsies, disabled people and gay people were also targeted.

The Nazis rounded these people up and put them in prisons called concentration camps and killed them, because they believed they were inferior human beings and wanted to get rid of them.

Nearly 7 out of every 10 Jews living in Europe at the time were killed.

Deliberately killing a large group of people like this is called "genocide".

Genocide is when a group of people are targeted to be killed because of who they are, such as their race or their religion.

Genocide does not just take place on its own. It's a steady process, which can begin if discrimination, racism and hatred are not checked.

On Holocaust Memorial Day, we are reminded of what can happen when prejudice and persecution are left unchallenged.

Why is Holocaust Memorial Day on 27 January?

The reason it is held on 27 January is because this was the day in 1945 that the soldiers fighting against the Germans took over the largest Nazi concentration camp called Auschwitz-Birkenau and freed the prisoners there who were still alive.

Sadly, the Holocaust is not the only genocide that has ever happened.

On 27 January, we also remember the millions of people who have been killed or affected by other genocides in the world, in places like Cambodia, Rwanda, Bosnia and Darfur.

Why is Holocaust Memorial Day Important?

The Holocaust Memorial Day Trust says: "It's a time for us to stop to remember the millions of people who have been killed or whose lives have been changed as a result of genocides."

Discrimination is when a person is treated unfairly because of who they are or characteristics that they have - for example, because of their religion, their race or whether they are a boy or a girl.

"We also think about those who survived to make sure that we learn from their experiences, when it comes to the decisions we make today."

"We're fortunate here in the UK that we are not at risk of genocide. However, discrimination has not ended."

Holocaust Memorial Day is a day to remember how important it is not to spread messages of hate, or to exclude people because things like the colour of their skin or what religious beliefs they have.

The charity says, it is a day to "work together to create a safer, better future".