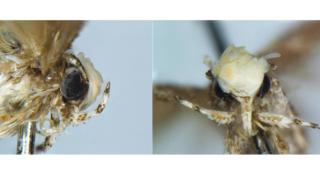 Dr. Vazrick Nazari
The moth was named after Donald Trump, because of its... unusual hairdo

A new species of moth has been named after the president elect Donald Trump.

The moth was discovered by scientist Dr. Vazrick Nazari when they were looking at a collection of moths from the Museum of Entomology, at the University of California in America.

They noticed that one of the moths was different to the others and didn't match.

After a bit more research the moth was revealed to be a brand new species, which Dr Nazari decided to name 'Neopalpa donaldtrumpi' after Donald Trump.

The scientist said the moths bright blonde scales and unique hairdo reminded them of the president elect.

However, Donald Trump is not the only president to have an animal named after them, Barak Obama had a fish called 'Tosanoides Obama' named after him last year!