Chelsea win their 12th game in a row on Boxing Day 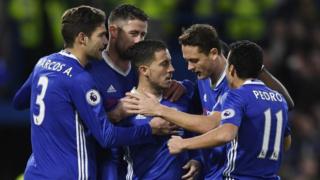 Chelsea have set a new club record after they beat Bournemouth 3-0 on Boxing Day. It was their 12th win in a row.

They were missing key players Diego Costa and N'Golo Kante through suspension but goals from Pedro and Eden Hazard ensured a comfortable win.

The victory sent them seven points clear at the top of the table.

They are now only two wins away from equalling Arsenal's Premier League record of 14 wins in a row.