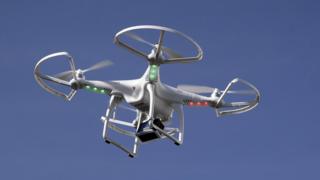 People who buy a drone in the UK might have to register it and take a safety test in the future.

This is because there have been lots of reported "near misses" recently - where drones have almost crashed into things, which could've caused an accident.

As a result the UK government are currently looking into making new strict safety rules about flying and owning drones.

They have also been looking at bringing in tougher punishments for people flying a drone in a no-fly zone - like near an airport.

There are already lots of restrictions in place for people flying drones in the UK.

For example, any drone with a camera must not be flown within 50 metres of buildings, cars or crowds of people.

Also, anyone using a drone as part of their business to make money, must register it with the Civil Aviation Authority (CAA).

The new government rules could mean that people have to take a test similar to one you might take when you learn to drive a car.

This could apply to any drone weighing more than 250g.

Some people think this new test could cost a lot of money and might be a bad idea.

However government ministers think it might help to increase safety.

The eagles trained to catch drones

Could drones deliver our shopping?