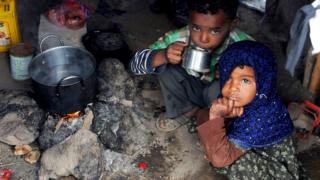 Getty Images
These children have been forced to flee from their home as a result of the fighting in Yemen. Here, they are gathered around a cooking fire in a refugee camp north of the capital city Sanaa

It is five years since a group of countries led by Saudi Arabia started to bomb the country of Yemen. Their aim was to remove power from a group of people called the Houthi rebels (anti-government fighters) and reinstate the government, which has fled the country into exile.

There has been conflict in Yemen for a long time and a civil war since the end of 2014. A civil war is when people from the same country fight each other.

The conflict has had a devastating impact on the lives of people living there, including many young children.

The United Nations (UN) - a global organisation that brings countries together to talk about, and try to agree on, world issues - says the fighting has caused lots of suffering.

It says the situation in Yemen is "the world's worst humanitarian crisis" - which means the health and safety of lots of people is under threat.

An estimated 12 million children are affected and that will get worse following the arrival of Covid-19 in the country, according to Unicef, a UN charity which works to improve children's lives around the world.

Read on to find out more about the situation in the country.

What is a civil war?

A civil war is when citizens or groups of people from the same country fight against each other.

Yemen is a country in the Middle East, to the east of North Africa and south of Saudi Arabia, Syria and Iraq.

The country as we know it today was formed in 1990 when south Yemen and north Yemen - which believe the country should be run in different ways - joined together after many years of fighting.

However, since then, the fighting has not stopped and there is now another civil war taking place, which has made life for those living in the country extremely tough.

Many people do not have the essentials that they need to survive, like food, water and shelter. 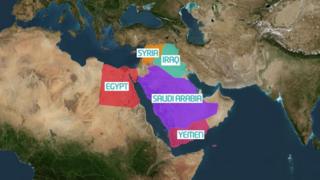 Yemen is situated in the Middle East, to the south of Iraq, Syria and Saudi Arabia
What has happened since Yemen was formed?

Despite joining together in 1990, the north and south of the country still disagreed with each other.

Fighting between the government and anti-government fighters (the Houthi rebels) continued.

The situation reached a peak in 2011 when protests led to the president at the time, Ali Abdallah Saleh, resigning and his deputy, Abdrabbuh Mansour Hadi, taking over. 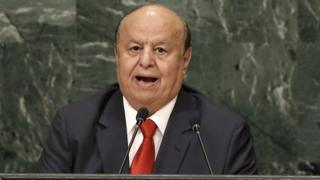 Reuters
Abdrabbuh Mansour Hadi is the official president of Yemen, but the rebels do not agree with him and his government

However, the fighting still didn't stop, as Mr Hadi struggled to keep everyone in the country happy.

The rebels took advantage of the new president's weakness and began to take control of areas. Many people supported them because they weren't happy with their country's leader.

At the end of 2014, the country descended into civil war, when the rebels - backed by Iran - took over the capital city of Yemen, Sanaa.

In March 2015, Saudi Arabia and its supporting countries started to bomb Yemen. They said they wanted to push out the Houthis and reinstate the legitimate government. The US, UK and France supported these strikes.

When President Hadi fled, he set up a temporary capital in a different city in Yemen called Aden, and has still not been able to return to Sanaa.

This civil war is still going on today and the country is locked in a difficult situation.

What is the situation in Yemen at the moment?

At the start of the war, Saudi officials said they believed the war would last only for a few weeks.

But five years later, the Houthis remain in Sanaa and the conflict continues. 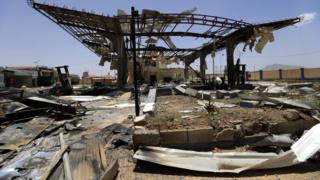 The Houthi rebels don't accept that Hadi's government makes their rules and have put their own government in charge.

However, much of the rest of the world - including the UK and the US - do not accept this. They both support the government which is exiled in Saudi Arabia.

So, it is a civil war that has become more of a regional one, as other, nearby countries have got involved.

The UK and others have called for ceasefires in Yemen, and want Saudi Arabia and its allies to end the war against the Houthi.

But the UK continues to sell weapons to Saudi Arabia, which leads the pro-government forces, so this helps the fighting to continue. Many people have been critical of this. 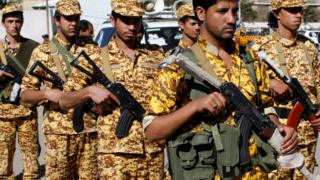 Reuters
These Houthi rebels do not believe that Hadi's government makes their rules
When will the fighting end?

The UN has been talking to the two sides since April 2020 about putting down their weapons and calling a ceasefire. A ceasefire is when the groups involved agree to pause their fighting.

Both groups agreed to a deal to stop fighting at talks in Sweden on 13 December 2018 and some hoped it would be the starting point to bring nearly four years of civil war to a close.

But the ceasefire was broken minutes after coming into effect on 18 December, pro-government officials said.

Another thing that has made the situation in Yemen more difficult is that, because of all the fighting and unrest, it became a place for extreme groups like Al-Qaeda and the group that calls itself Islamic State to base themselves and grow stronger. The groups have carried out attacks in the south of the country.

There has even been fighting among different groups on the same side. The Southern Transitional Council (STC) forces want south Yemen to be its own country again and have supported the Saudi-led coalition. But the two sides fell out and fought among themselves, before reaching an agreement again in July 2020.

Yemen has also always been one of the poorest Arab countries, which has made it difficult to deal with the situation too.

But according to Martin Griffiths, the UN's Special Envoy in Yemen, as long as the rival groups keep talking about a ceasefire, "there is a chance for peace in Yemen". A UN special envoy is someone appointed by the organisation to help deal with a specific issue.

What's being done to help people living there?

The fighting has had a devastating impact on ordinary people who live in Yemen.

Restricted deliveries of food and fuel, and roads and buildings being destroyed, has led to millions of people not having the basic essentials that they need to live.

The price of food has become incredibly expensive and many people cannot afford to eat. 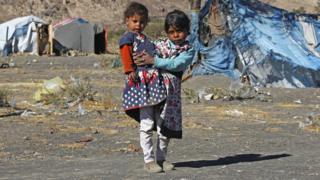 EPA
Millions of people have had to leave their homes in Yemen because of fighting in the country, like this girl and her sister

People also don't have access to the healthcare they need. In 2017, there was an outbreak of cholera - a dangerous disease found in dirty water - in Yemen, due to poor sanitation and people not being able to get the treatment they needed, which killed many people. The Covid-19 pandemic is the latest threat to people living there.

More than three and a half million people have also been forced to flee from their homes, according to the UN. But with airports closed and borders blocked, many are unable to leave the country, despite the problems. 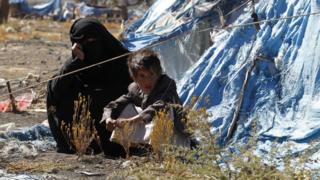 European Photopress Agency
Millions of people's lives have been affected by the civil war, like this mother and her son who have had to leave their home to live in a temporary shelter

Charities are working hard to try to help those affected by the crisis.

A UK organisation called the Disasters Emergency Committee (DEC), which represents 13 aid charities, launched a big appeal asking for people to donate money to help make sure that people in Yemen have what they need to live.

The British Red Cross - a charity represented by the DEC - said: "The ongoing conflict in Yemen has devastated millions of people's lives." 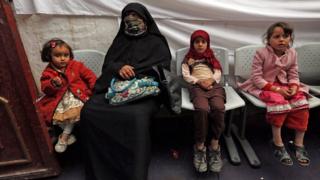 European Photopress Agency
The fighting has meant that many people don't have access to things that they need, like medical care. Here, a woman and children wait to be treated in a medical centre

Another charity, Save the Children says it is "horrified" by the number of the children who have died as a result of extreme hunger, adding: "For every child killed by bombs and bullets, dozens are starving to death and it's entirely preventable."

Unicef also launched a big new emergency appeal earlier in 2020 to raise hundreds of millions of pounds to help people.

For now, the conflict continues and life for millions of people in Yemen continues to be a fight for survival.

What does famine mean?