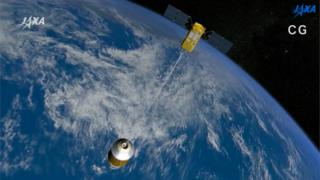 Japan Aerospace Exploration Agency (JAXA)
The cable will be able to be moved using the electric current running down the cable, meaning it can sweep up debris in space

Space. A vast area filled with speeding comets, planets and well, a LOT of junk.

But Japan could have a plan to whip the junk into shape, or out of the way, at least.

They think Kounotori, the Japanese space ship with a 'tail' could be the answer.

The tail, which is longer than six football fields, will be stored in the cargo ship and released when the ship gets to space.

The cable will then 'sweep' at space junk, slowing it down and redirecting it towards earth where it will burn up on re-entry. 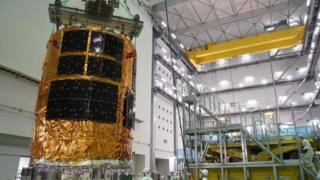 The tail could also be used to grab large pieces of junk to pull them to earth.

Japan Aerospace Exploration Agency (JAXA) says it hopes to put the junk collection system into more regular use by the middle of the next decade.

They said: "If we are successful in this trial, the next step will be another test attaching one tip of the tether to a targeted object,"

Crew safe after suspected leak on board ISS

Geminid meteor shower 2021: How and where to watch it

Astronaut Tim Peake touches down on earth after space mission