Who will win X Factor tonight? 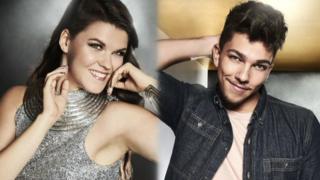 It's the live final of The X Factor tonight and we asked who you think is going to win it.

Saara, who's from Helsinki in Finland, could become the first non-UK winner of the show if she wins tonight.

Matt, who is from Bromley in London, sang with his mentor Nicole Scherzinger last night.

I love Saara and want her to win as she has the most amazing voice ever!

I want Saara Aalto to win because I think Matt will still have a singing career if he comes second and the runner up often has a more successful career than the winner and I would like to see Matt go on and have a successful career, rather than just a couple of years of success like the winners.

I think Matt will win because all the girls adore him and he's got a good voice.

I think Matt Terry should win as he had a strong start at the beginning and is a great performer even if Saraa Aalto is better at singing.

I think Matt should definitely win the X factor because he has got an amazing voice and I loved his performance singing writings on the wall! Good luck!

I want Matt Terry to win. If he wins I will be so happy. Matt terry has a great voice.

I want Matt to win. Matt has been working hard from the very start so has Saara. But Saara has already won the X Factor in Finland. Matt should be given a chance at fame! Matt we are all backing you.

I love both of the finalists, they are amazing. But I think Matt will become the winner.

Matt Terry is going to win the grand final.

I think Saara should win because she is much better than Matt. She's got a much stronger voice than Matt.

I think Saara will win, because she's a really good singer. Matt is good but not as good as Saara.

I think Saara Aalto should win because she is from Finland but sings in fluent English.

Thank you for your comments. This page is now closed.