Cheerleading could become an Olympic sport 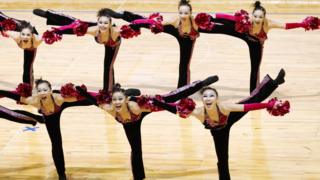 AFP
Coming to an Olympic Games near you?

Cheerleading has been given provisional recognition as an Olympic sport.

That means the sport will get £19,700 a year from the International Olympic Committee to spend on training the cheerleading athletes of the future.

The martial art of Muay Thai has also been granted this new status.

These two new sports would take the number of recognised Olympic sports to 37.

Becoming part of the Olympic Games can take seven years, but host cities are allowed to introduce sports of their choice for a one-off appearance.

Tokyo, hosts of the 2020 Games, will have surfing, sport climbing and karate among the six new sports they have included.

"Cheerleading is a sport with growing popularity. It has a strong youth focus and we noted that," said IOC sports director Kit McConnell. 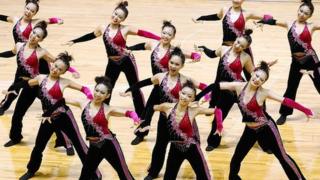 Getty Images
It's not about pom poms...
What is competitive cheerleading?

Competitive or "All-Star" cheerleading is very different to the sort of stuff you might have seen at American football or basketball games.

Teams are judged on gymnastic tumbles, dance, stunts, and pyramids.

It is daring and physically demanding.