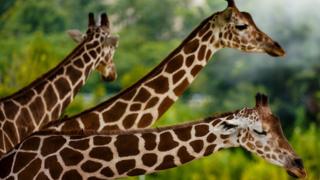 Giraffes are the tallest mammals on Earth, but their numbers have dropped so low that they're now vulnerable to extinction.

The number of giraffes living in the wild has dropped by 40% in the past 30 years.

This is because of poaching, habit-loss and droughts caused by climate change - and many are worried about what this might mean for giraffes.

So conservationists celebrate World Giraffe Day to draw attention to this unusual creature.

But what makes them so special? Here are seven amazing facts about them that you might not have known...

10 strange names for groups of animals

There's a special night for bats this weekend!

1. They have super strong tongues 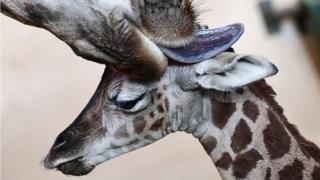 Giraffes have strong tongues that help them to get their food - and to get it fast.

An average giraffe's tongue is around 40-50cm long.

They use their tongues - like humans would use their hands - to grab food.

Their long tongues help to give giraffes enough force to rip leaves off acacia trees while avoiding the thorny spikes on the branches.

2. They have incredible eyesight 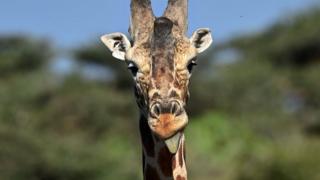 This is because of where a giraffe's eyes are located on their heads.

It gives them panoramic vision - meaning their vision is much wider than most mammals.

This helps for spotting predators and seeking out watering holes and trees from far away.

3. Their pattern is unique 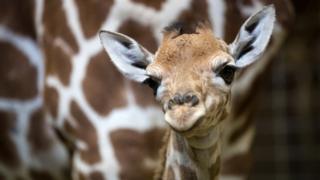 Getty Images
Each giraffe has its own unique pattern!

Just like human fingerprints, no two giraffes have the same spot pattern.

And each of the different species of giraffe have very different types of spot patterns when you look at them closely.

4. They sleep standing up 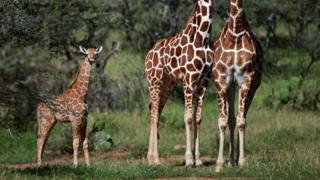 Getty Images
Their legs might look spindly, but they are strong

Giraffes spend most of their lives standing up; they even sleep standing up!

They do sometimes give their legs a rest, but all that standing is ok as their legs are very strong.

In fact scientists think that a groove in the giraffe's lower leg bone - which is much deeper than in other animals - helps keep their spindly-legs strong and allow them to support their bodyweight.

5. Giraffes are tall, no REALLY tall! 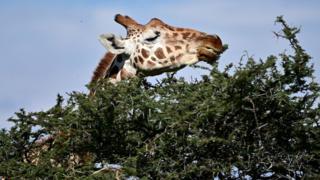 Getty Images
STRETCH! Giraffes really are the tallest animals in the world

Giraffes are world's tallest living mammals thanks to their incredibly long necks.

A male giraffe can grow up to 5.5 metres tall (that's taller than a double-decker bus!).

The tallest giraffe is called Zulu and currently lives at Pembrokeshire zoo! 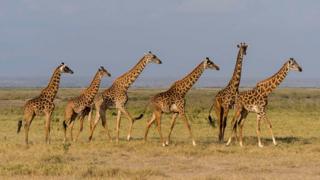 Getty Images
Giraffes love to hang out in groups

Similar to a pack or a herd, towers usually have around 15 members which are led by a male adult giraffe with the rest being made up of young males and females.

7. This ancient giraffe was the biggest ever 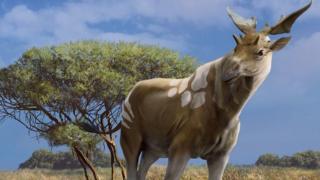 The largest giraffe relative ever to have existed is thought to have been the Sivatherium giganteum.

It's believed to have lived one million years ago in Africa and Asia and had a shorter neck and legs than giraffes of today.

The Big Question: Why do giraffes have long necks?

Giraffes to be better protected from poachers