It's being taken apart and recycled at a plant in Turkey after 32 years of work and sailing 900,000 miles during that time.

The ship was used as a landing platform for fighter jets, but it also helped in disaster zones.

Its final voyage left from Portsmouth this morning.

Crowds of people lined the shoreline to watch the ship sailing off. 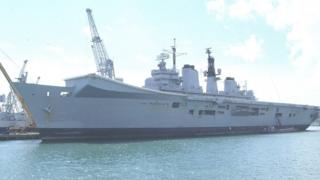 The former aircraft carrier has been sold for scrap for £2m

HMS Victory wreck to be raised from English Channel