Guide: Who are the Red Arrows? 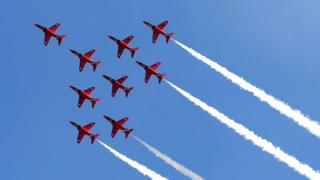 The Red Arrows - the RAF's team of very skilled display pilots - are returning from their latest 60-day world tour.

The tour saw them perform a public display in China for the very first time in their history.

It was their biggest tour abroad in a decade, including visits to other countries including Singapore, Malaysia, Oman, Bahrain, the UAE and Kuwait.

The Red Arrows have now performed in 57 countries since the group was formed in 1965. 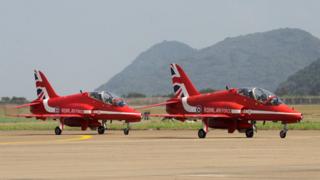 Getty Images
It's not hard to see why they're called the Red Arrows!

But where did they come from and why are they so important?

The Red Arrows form part of the UK's Royal Air Force (RAF), as its aerobatic team.

They are a flying display team that demonstrates to the public all of the skill, ability and speed of RAF pilots.

They fly in impressive shapes and formations, extremely close together, and are known for making smoke come out of the back of their planes to draw patterns in the sky, as you can see in the picture below. 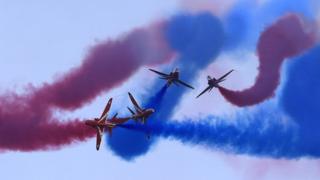 Getty Images
The Red Arrows are famous for performing extremely skilful displays, often with coloured smoke coming out of the back of their jets to create patterns in the sky

The pilots fly planes called Hawk Jets, which are painted bright red and can reach speeds of just over 600 miles per hour.

The team isn't just made up of the pilots, though.

There are more than 120 people on the Red Arrows team, including engineers and support staff needed to make sure the planes keep working and the team is run successfully.

Its home is RAF Scampton in Lincolnshire.

Where did they come from?

The Red Arrows were formed in 1964, when the RAF decided to bring together all of its display teams.

"Red Arrows" is a mix of the names of two other teams at the time - the Black Arrows and the Red Pelicans. 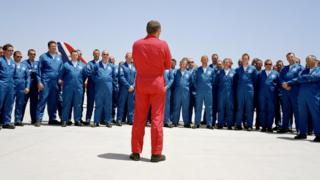 Getty Images
The engineers and support staff are known as 'Blues', as they wear blue suits, while the pilots wear the famous red suits

They celebrated their 50th birthday in 2014, with lots of celebrations and special displays.