Coconut crab has the worlds most powerful claw 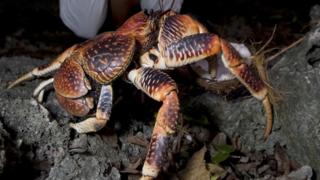 Meet the coconut crab, a massive species of crab which lives on the land.

Scientists have measured its grip and found that its claw is stupendously strong!

The coconut crab has the most powerful claw of any crustacean, that's creatures like crabs, shrimps and lobsters.

The projects lead scientist, Shin-ichiro Oka said that the crabs' grip is almost as strong as a lion's bite.

This puts the coconut crabs claws strength higher than most other land hunters. 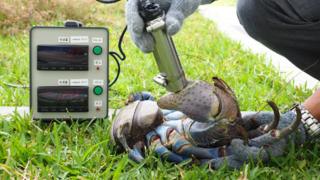 Shin-ichiro Oka
marine biologist Shin-ichiro Oka and his team did strength tests on 29 wild coconut crabs on the Japanese island of Okinawa.

The coconut crab uses its powerful claws for a number of things, but mainly for eating.

The powerful creatures are fierce and their claws are used to kill smaller crabs to eat and also to crack open hard food like coconuts.

They also come in handy when they have to fight off things trying to eat them.

They live alone in burrows or in cracks in the rocks and will attack other crabs if they meet them.