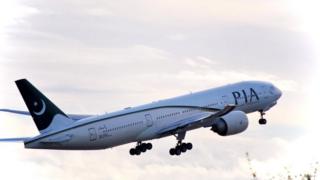 A photograph of a PIA plane, similar to the one which had to land to have its loos unblocked

A flight over the weekend had to make a pit-stop at Manchester airport to have its loos unblocked.

The plane was flying from Toronto in Canada to Lahore in Pakistan when those on board encountered a "poo-roblem"...

The plane's toilets got choked, due to something solid thrown by passengers

According to Pakistan International Airlines which ran the flight, "something solid" had been thrown down the loo by passengers.

Because all of the loos are connected by the same pipe, this meant that the rest of them on board got blocked up too!

It wouldn't be possible to continue the flight all the way to Pakistan without any functioning loos, so the plane had to land at Manchester Airport to have its drains unblocked, before it could set off again.

"Inconvenience caused to passengers is regretted," said the airline.