Storm Angus: Has it affected you? 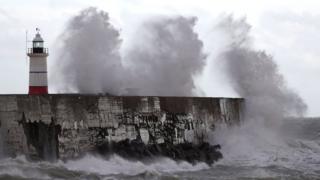 The first named storm of winter - Storm Angus - has hit southern parts of the UK over the weekend.

Winds of up to 80mph swept through some areas, with heavy rain causing flooding.

Hundreds of homes were left without power, and members of the crew on a cargo ship near Dover had to be lifted to safety in the rough sea.

More rain today could cause further flooding in some areas.

A large tree branch had fallen in the road near where I live.