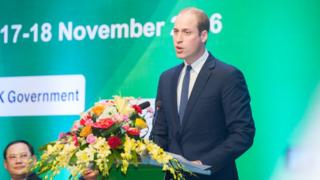 Prince William has urged governments - including leaders in the UK - to protect elephants from the ivory trade by banning it completely.

At a wildlife conference in Vietnam, he said: "Ivory is not something to be desired and when removed from an elephant it is not beautiful."

"Why are we still trading it? We need governments to send a clear signal that trading in ivory is abhorrent."

"China has already signalled a total ban, the USA has instituted one, and other nations, including the United Kingdom, are considering it," he said.

Currently, tens of thousands of elephants are killed by poachers every single year to steal and sell their tusks, which are made of ivory.

While there is international ban on buying and selling ivory to other countries, you are still allowed to buy and sell certain kinds of ivory within countries.

At the same conference, the UK government announced that it will spend an extra £13 million on new ways to tackle the illegal wildlife trade.

Environment Secretary Andrea Leadsom said: "This builds on our plans to ban the sale of modern-day ivory - an important first step as we press for a complete ban."

Talking about an international conference in Johanesburg - which Newsround went to - Prince William said: "We have seen the world come together...to finally call for an end to the ivory trade."

However, he made it clear that more needs to be done to stop it happening.

He also spoke about the need to protect other animals which are being illegally killed saying that "we aren't moving fast enough to keep up" with the situation. 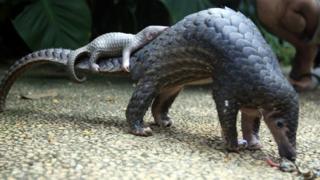 "Rhinos, elephants, pangolin, lions - they are all still being killed in horrifying numbers," he said.

Despite his message that we do need to do more to protect elephants and other endangered animals, Prince William is hopeful that we can save them.

"We can win this battle," he said.