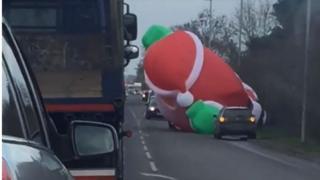 Santa won't be driving home for Christmas any time soon after this ho-ho-hold-up on a road in Cambridgeshire...

The giant floating Father Christmas broke free and drifted on to the road blocking it in both directions. Taxi driver Muhammad Fareed, who took this photo, says the inflatable Santa was 'massive!' and that "It was one of the more unusual reasons to be stuck in traffic."

"Swan just chillin' on the carriageway" 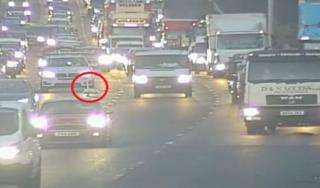 Glasgow motorists faced disruption during a morning rush hour this week after a swan wandered onto the motorway.

The swan was pictured standing in the middle of four lanes of extremely busy traffic.

Traffic Scotland tweeted there were delays "due to a swan just chillin' on the carriageway".

Police were called to the scene to deal with the incident and the traffic problems were cleared.

The swan which was actually injured, was later rescued.

More swans on the loose.

Apparently swans just love blocking traffic...These swans did the same when they went out for a wander in Inverness in the Scottish Highlands. 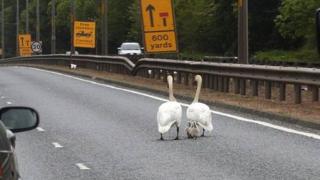 The birds walked out into a very busy road, causing a queue of cars that was five miles long. Drivers were stuck for at least 20 minutes!

Police and the Scottish SPCA were called to the area and the swans were safely taken away. 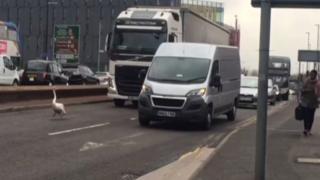 Joe Daly
In a video taken by Joe Daly, a swan was seen holding up lots of traffic in the centre of Manchester

This swan decided to take a walk in the centre of Manchester and held everybody up. 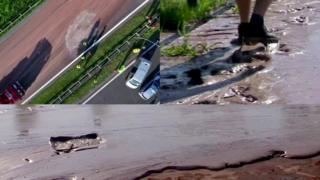 Take a look at this picture... Looks like a muddy road, right? Wrong! That is actually chocolate milk which spilled out of a truck onto a motorway in Poland. It brought traffic to a standstill and in some areas, the chocolate was so thick that heavy machinery had to be brought in to scoop up the mess.

Bogdan Kowalski, one of the firefighters dealing with the situation, explained: "Even oil stains are easier and quicker to remove than smeared chocolate." 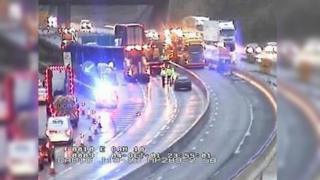 In November 2016, there was chaos on one the UK's main motorways after a lorry crashed and spilled cola syrup all over the road!

Thankfully, nobody was seriously injured in the incident.

However, the motorway police were still working to clear things up at lunchtime the following day - with cars still getting held up.

I want to 'beak' free

People in Hampshire driving to work got held when they found themselves face to face with a daring emu on the road. 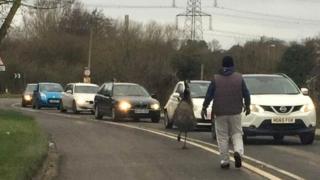 Megan Strange
Megan Strange, who was driving to work, snapped this picture of the naughty bird. "Everybody was just laughing - it's an odd sight to see," she said

It is thought the cheeky bird had escaped from a nearby farm at about 08:30 that morning.

One man ran after the animal and, with the help of another driver, was able to catch it and take it back to where it came from.

A sheepdog who wanted 'to go for a drive'

One of the most bizarre cases of traffic being held up was when a sheepdog called Don decided to 'drive' a tractor into the middle of a motorway in South Lanarkshire, Scotland.

His owner Tom Hamilton - a local farmer - had parked the vehicle and left the dog on the passenger seat, while he went to inspect a lamb.

While he was away, the dog leant on the controls - and the tractor started to drive out of the field!

It rolled down the verge, crashed through a fence and drove on to one of Scotland's busiest motorways - with Don still in it! 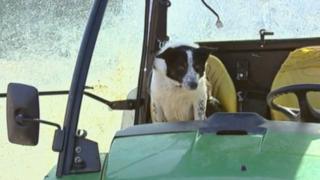 Don the sheepdog is safely back in the tractor - but sticking to the passenger seat this time!

Miraculously, no drivers were hurt - and Don was absolutely fine too. Although the window of Tom's tractor was smashed...

A robot who got a bit lost

Drivers in a city in Russia were left a bit confused when they were stopped by a robot in the middle of the road.

The machine had escaped from a science lab, where - funnily enough - it was learning how to move around on its own.

It is thought it got out when someone who works at the lab left a gate open. 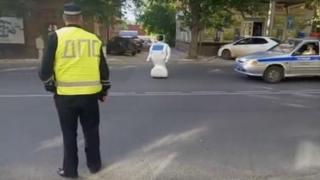 It wandered as far as 50 metres away, before its battery died and it was left standing in the middle of the road.

Some people say that the science lab let it escape deliberately so that people could see their new machine.

A block that no-one could get past(a)

Traffic in Shropshire was diverted after a road was closed due to a very bizarre spillage.

A lorry caused chaos after spilling an enormous 20 tonnes of spaghetti bolognese all over the country roads! 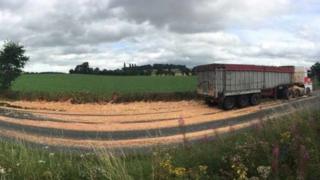 Shropshire Star
We bet cleaning this mess up cost a 'penne' or two!

A spokeswoman for the police said it wasn't clear how the pasta had ended up all over the place, but thankfully no-one was hurt.

According to Highways England, it was "quite a clean-up job"!

A minion who'd had enough of the fair

Drivers in Dublin, Ireland, were left puzzled when a giant, inflatable minion got in the way of their journey.

The blow-up character had been on display at a nearby fairground, but strong winds had blown it free and it came to rest on the road. 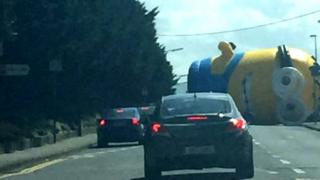 Erin Van Londen
Drivers would not have expected to see this lying across the road when they set off that day!

Police arrived and the 12-metre minion was deflated and taken away in a wheelbarrow!

Swans cause five miles of traffic jams in Inverness