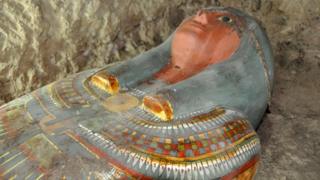 AFP/Getty Images
Archaeologists are extremely excited after finding a new tomb with a 2500-year-old mummy in it!

A mummy has been found near Egypt's Valley of the Kings, which experts think might be as many as 2,500 years old!

It was found on the west side of the Nile river within a tomb, which it is thought dates back as far as 1075-664 BC. 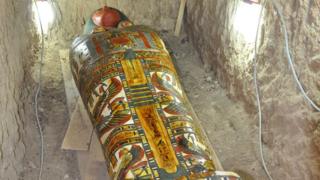 Fortunately for archaeologists, the mummy is said to be in "very good condition".

The mummy is encased in a special kind of brightly-coloured wooden coffin called a sarcophagus.

According to Myriam Seco Alvarez - head of the Spanish team of archaeologists that made the discovery - it is decorated with religious symbols from Ancient Egypt, which is what people used to do to mummies at the time.

Ancient Egyptians mummified bodies in this way because they thought it helped them in the afterlife and helped to preserve the body. 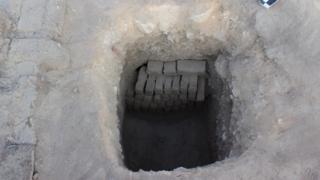 Egypt's Ministry of Antiquities said they thought the tomb might have belonged to someone called Amenrenef - a servant to the household of King Thutmose III, who was alive during the 1400s BC.

There are many tombs and temples built by ancient pharaohs in the area. We wonder how many more they might find!