Virtual reality or VR headsets are one of the biggest tech trends of the year, and could soon be part of our daily lives.

The first VR headsets were released earlier this year, and have already been selling in their thousands.

The PS VR even outsold every other console on the market, during its first week of release in Japan.

Tech expert Mark Zuckerberg, who created the social media site Facebook and owns a VR company, thinks that Virtual Reality is: "going to change the way we live and work and communicate in the future."

So, we asked four tech fans to put some of the best VR headsets through their paces, and find out what they think... 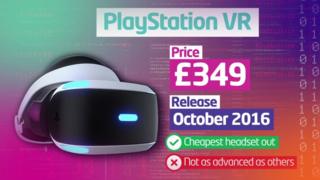 The Playstation VR is the most recent VR headset to hit the market, being released on the 13th October 2016.

The headset was really comfy... I didn't feel like it was there.

Although it is the cheapest of the four VR headsets we reviewed, you still have to have a Playstation 4 console and a Playstation camera to play it, which can more than double the overall price!

However, like the Oculus, it is not "fully immersive" - you can only sit or stand and look around whilst using it, you cannot walk around.

One of the major points about the PS VR, which separates it from the other headsets, is that there are already lots of games available for it, with more on the way. 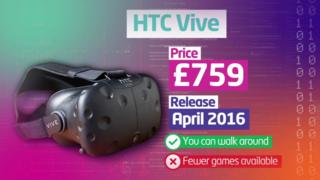 It's one of the more technically advanced headsets available and is completely immersive - meaning you can walk around freely - well, as far as the cable will let you!

I love the fact that you can just walk around anywhere.

Its sensors help to warn you of objects around you, and stop you from bumping into things.

However, you do need a very powerful computer to be able to run it - and its costs a lot more than the PS VR and the Oculus Rift.

Also, there aren't as many games as some of the other consoles. 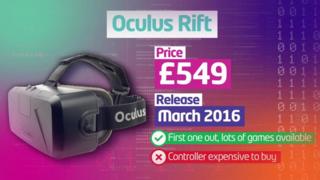 Then there's the Oculus Rift...

The Oculus was the first VR Headset to hit the market, and as a result, has lots of games available for it.

I think the headphones really make a difference, compared to all the other headsets.

However, the Oculus was released without a specific controller - and when the controller does come out in December, it will be around £190. Currently you can use an XBox controller, and need a powerful computer to run it.

Like the PS VR, you can't move around whilst playing on the Oculus just yet, however they are looking into changing that by the end of the year.

The Oculus has built-in headphones, which makers say makes it feel more "immersive" - like you are in the game. 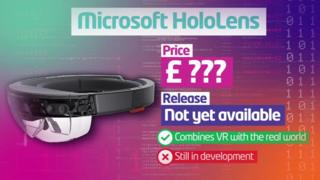 This high-tech headset is only available to developers at the moment, who can try it out and help the makers to improve it.

It combines virtual reality with augmented reality - meaning you can see digital things in the real world - similar to mobile apps like Pokémon Go.

It was AMAZING... I liked how it used the real room.

It doesn't come with a controller, as you control it by moving your hands around and using key words to tell it what to do.

It also doesn't have any cables, like all of the other headsets - meaning you have completely free movement.

People have said it can be a bit difficult to adjust to your head, and it is quite heavy at the front, meaning it can slip down your nose.

You can also only see the virtual shapes directly in front of you, meaning there is a bit of a gap around the edges of where you can see.

Microsoft haven't given a specific date as to when the HoloLens will be available to buy in a shop, but they have hinted that it might be a few years away yet. 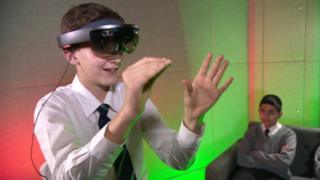 You can control the HoloLens using your hands and your voice.

Virtual reality is still pretty new, and scientists aren't sure how it will affect people's health in the long-term, especially eyesight.

So most VR makers have guidelines which recommend that only people over the age of 13 play them.

Some people have also reported feeling a bit seasick whilst playing on them.