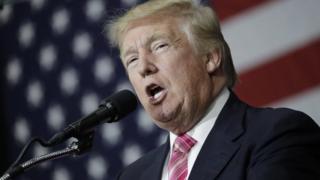 Donald Trump is an American businessman, who became famous in the US after he appeared on The Apprentice TV show there.

He is 70 years old, which means he will be the oldest President in US history.

What does he want to do when he is President?

Donald Trump has said he will "make America great again".

He has said that he will create more jobs and industry in parts of the US that have recently had a lot of unemployment.

He also wants to be tougher on terrorism, including the extremist group Islamic State.

Trump has been tough on immigration and says he will build a wall between Mexico and the United States to stop people coming into the US illegally.

He has also said that he will throw illegal immigrants living in the US out of the country.

He has called for people coming into the US, including Muslims, to face strict checks which he says will help stop extremist groups like Islamic State.

Why has he caused controversy?

During his campaign, Donald Trump has made sexist comments about women which offended many people.

He also made a number of controversial comments about people from other countries and races.