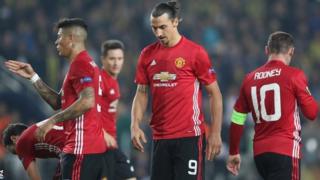 Manchester United manager Jose Mourinho has accused his players of approaching their Europa League game against Turkish team Fenerbahce as if it was a "summer friendly".

The Red Devils dropped to third in Group A of the Europa League following a 2-1 defeat.

United have now won just two of their last seven games in all competitions.

United have scored just two goals in their last four matches, while conceding (being scored against) after just 30 seconds against Chelsea and 65 seconds against Fenerbahce.

"A team that concedes after two minutes is a team that is not ready, not mentally prepared, not focused, not concentrated," said Mourinho.

Striker Moussa Sow started the goals off for the Turkish team with a beautiful overhead kick. Jeremain Lens added another point off a free-kick, with Wayne Rooney bringing a goal for United towards the end of the match.