The Football Associations of England and Scotland say they will ignore a ban on players wearing poppies in their upcoming match on 11 November.

The two nations meet in a 2018 World Cup qualifier on Armistice Day, also known as Remembrance Day, when the United Kingdom remembers those who have lost their lives in war.

But Fifa, who are in charge of world football, say they do not allow any nations to have any political, religious or commercial messages on shirts.

They had turned down a request to allow England and Scotland's players to wear armbands with poppies on.

The FAs have now said that they will let their players wear the armbands anyway and will accept any punishment.

Poppies are worn by millions as a symbol to remember those who have lost their lives in war or been injured. 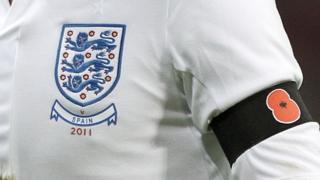 Press Association
In 2011, a decision to wear the poppy printed on an armband was made for England's friendly against Spain

British Prime Minister, Theresa May, has said Fifa's refusal of players being allowed to wear poppies is "outrageous".

Speaking at Prime Minister's Questions on Wednesday, she said: "Our football players want to recognise and respect those who have given their lives for our safety and security - I think it is absolutely right they should be able to do so."

The Football Association of Wales has also written to Fifa requesting permission to wear poppies on armbands during their game against Serbia in Cardiff on 12 November but has not yet said if it will ignore the ban.

Fifa allows players to wear poppies on the pitch