Mars Insight celebration: Why do we shake hands?

Do you have a secret handshake that you like to do with your best friend?

Well, two scientists from Nasa have made the world fall in love with their very own secret handshake, which they used to celebrate the touchdown of their latest mission to Mars.

When the InSight lander successfully settled on the surface of the red planet, the two scientists pulled off a fun routine, which social media has fallen in love with.

But why do we shake hands in the first place?

Unusual greetings around the world

How to act when meeting the Queen

Where did the handshake come from?

Archaeological ruins show handshaking practices being used as long ago as in ancient Greek times, as early as the 5th Century BC. 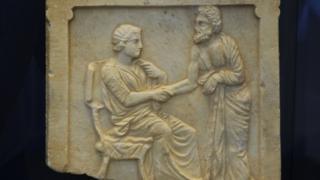 The traditional greeting as we know it today is believed to have come from when people used to use swords for fighting.

People would carry them in a case, called a scabbard, on their left side.

This meant they could draw their sword with their right hand, if it was needed. 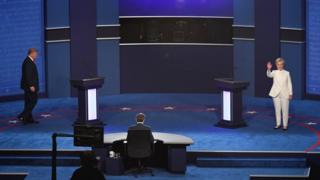 Getty Images
At the third and final US presidential TV debate in October 2016, presidential candidates Donald Trump and Hillary Clinton didn't shake hands, which was unusual

Shaking hands, which is traditionally done with your right hand, became a friendly greeting because it was proof that you came in peace and weren't holding a weapon.

It was also a sign of trust that you believed the other person wasn't going to take their sword out to fight you either! 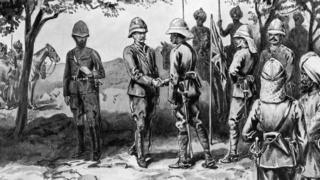 Getty Images
This sketch shows two army generals in 1897 shaking hands. You can see the soldiers have swords down their left-hand sides

Manners expert William Hanson explains: "A handshake showed you meant the other person no harm. It's important today as it's a sign of trust and friendship."

When are handshakes used?

It's not just in politics where we see people shaking hands with each other as a sign of respect.

But sometimes people make a point of not shaking hands, which can be seen as unusual.

For example, at the third and final US presidential TV debate in October 2016, presidential candidates Donald Trump and Hillary Clinton didn't shake hands, which was seen as unusual as it is a sign of respect to do so.

When sport stars don't shake hands, it is usually criticised as it is not considered proper sporting behaviour. 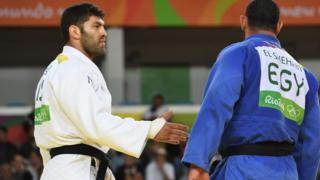 Getty Images
At the Olympics in Rio, Egypt's Islam El Shehaby (right) refused to shake hands with Israel's Or Sasson after losing to him at judo. It was reported that he was sent home early for doing this, although Egypt's judo federation said he went home when he had originally planned
Are there alternatives to handshaking?

Despite the handshake being very common, not every country uses this as a traditional way to greet people.

As Mr Hanson says: "Almost all countries shake hands, although in Japan they bow, and in some other Asian countries, like Thailand, they do the Namaste."

The Namaste is when the person greeting will usually say the word "Namaste" to the other, with their hands pressed together, and do a slight bow. 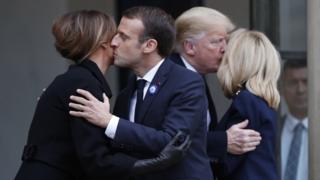 Some countries in the Middle East do shake hands, but it might not be as firm as we would shake hands in the UK.

In China, it's polite to shake hands more lightly too and it might last for as long as 10 seconds.

Hand shake is most unhygenic greeting