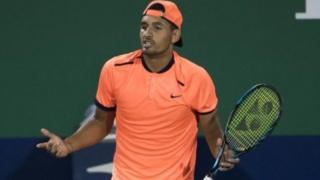 Australian tennis player Nick Kyrgios has been banned for eight weeks and fined over £20,000 for his behaviour on court

The ATP, who run men's tennis, said Kryrgios argued with a fan, swore and didn't try hard enough during in his 6-3, 6-1 defeat by Mischa Zverev.

The 21-year-old patted the ball over the net several times when serving and he also began walking back to his chair before a Zverev serve had even landed.

World number 14 Kyrgios said he was "truly sorry" and would "use this time off to improve on and off the court".

He added: "I regret that my year is ending this way. "

"The season has been a long one as I battled several injuries and other challenges towards the end of the summer."

"This is no excuse, and I know very well that I need to apologise to the fans." 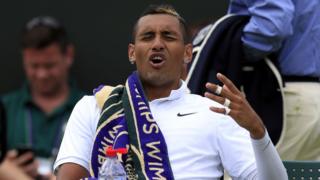 PA
Kyrgios getting annoyed at the umpire at Wimbledon

It's not the first time Kyrgios has been in trouble with the tennis authorities: