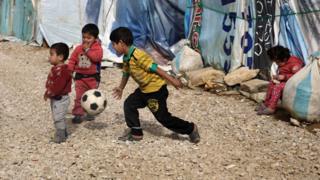 AP
A Unicef report has said that children make up almost half of all refugees, who have been driven from their homes because of war and poverty

Groups of children are arriving in the UK from a migrant camp in France, where some of them will be reunited with members of their family.

The children have come from a French town called Calais, where there is a very big camp where as many as 10,000 migrants and refugees currently live in temporary homes. 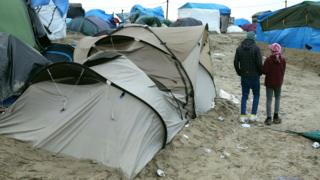 Many have arrived at the camp from all over the world in order to try to reach the UK, where they want to live.

This is often because their home countries are no longer safe to live in because of war and poverty, or they want to find a better life. 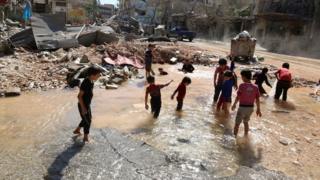 Reuters
Children playing in the destroyed city of Aleppo in Syria, which has been badly affected by war

There is a problem at the moment because the camp - which is known as the Calais Jungle - is due to be closed down next week but thousands of people are still living there.

One of the biggest worries is that there are many children who are living there on their own. They are called 'unaccompanied minors'.

The UK Government say about 100 children will be brought over to the UK before the Jungle camp is dismantled.

Why are there children on their own?

Millions of people all over the world have left their own countries to find a better life or a safer place to live.

Some children are able to travel with their families. 11-year-old Manar told Newsround how she was moved to the UK with her family from a refugee camp in Lebanon.

However, there are many children who travel on their own.

Some had to leave their parents behind in the countries where they're from, or others may have got separated from them on the long journey.

One girl called Ruth told Newsround her story of how she travelled without her parents from Eritrea in Africa to the UK, because she didn't want to join the army or marry someone she didn't know, which she would have been forced to do.

Another 11-year-old boy called Safid told Newsround how he travelled to the UK from Afghanistan - a journey which took him a whole year.

He started the journey with his father, but they became separated so he and his brother were living on their own in the Calais camp.

Child refugees who have family members in the UK are allowed to come to this country to live with them. The process can take a long time as there is a lot of paperwork.

Under the law, claims to stay in a European country must be made in the first safe place a person reaches, but children can have their claim transferred to another country if they have family members living there.

However, there are children in camps who do not have family in the UK, and European leaders are trying to work out what to do with them. Some of them have already come to the UK.

As one young boy called Omar told Newsround: "There is no way out of the Calais jungle unless somebody helps you."

What will happen to the children who come over to the UK?

When the unaccompanied children come over to the UK from Calais today, they will need to be registered at a special office in London.

This is so that the authorities know that they are here and who they are living with.

Once they've done this, they can be reunited with their family members who will be waiting for them in nearby churches.

Politicians have said they are also trying to find homes for children who don't have relatives in the UK and it has been reported that councils are working to create space for refugees.

But some people say not enough is being done to make sure that all of the children who have been living in the Calais refugee camp will be safe.

Other European countries are also working to help give refugees and asylum seekers a home. Eight-year-old Karim told Newsround that Germany had been extremely welcoming when he moved there.

In the past year millions of people from countries like Syria have made long and dangerous journeys to get to Europe or have fled to refugee camps in other Middle Eastern countries.

However, European leaders have still not decided how many people should be allowed to come to Europe.

Children need to go to school and the adults will need to find jobs, so many countries are worried that they cannot cope with so many extra people.

Some don't think any migrants or refugees should be allowed to come at all.

Earlier this year Newsround spoke to some UK schoolchildren about the issue:

You can find out more about Europe's migrant crisis click here, or if you're upset by this story, or anything in the news, you can find advice here.

Why is the Calais camp being cleared?

Inside the Calais jungle