'Like being in Jurassic Park!' London Zoo gorilla recaptured 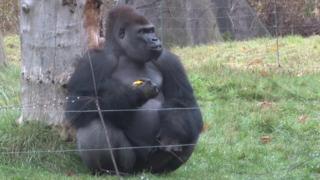 A male gorilla has been recaptured after escaping from his enclosure at London Zoo.

Kumbuka, a western lowland silverback gorilla, had escaped into the keepers' area, a secure space not accessible to the public.

For safety reasons visitors were told to shelter in zoo buildings, while zoo staff gave Kumbuka some drugs to make him sleepy for a while and returned him to his den.

People described the moment as "like being in Jurassic Park."

While an investigation is under way to find out how Kumbuka escaped, London Zoo insist that "at no time were any visitors in danger" and that staff felt it was "the best process" to tell people to stay indoors.

Following the incident, curator of mammals, Malcolm Fitzpatrick said they were "happy to report that Kumbuka is up and grumbling and interacting with the rest of his family in his gorilla kingdom."