Will Young says Strictly exit is no drama 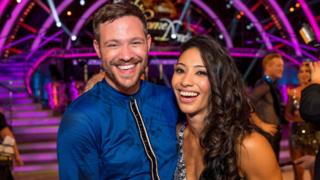 Singer Will Young says he is "absolutely dandy" after leaving Strictly Come Dancing, and says his early exit is "undramatic".

It was announced that he quit Strictly Come Dancing for "personal reasons".

He praised his professional dance partner Karen Clifton and said he leaves with "joy in my heart that I have been able to take part in one of the most loved shows on British television."

Will and Karen came joint fourth in Week 3, with 31 points, despite being criticised by judge Len Goodman for not having "enough salsa" in the routine.

The couple were due to dance the Viennese Waltz on Saturday's show.

The programme will still proceed as normal with a results show on Sunday when the third celebrity will be voted off.

Will Young is only the fifth celebrity contestant to pull out of the show in its 13-year history.

Chat: Strictly dance partners - what do you think?

Strictly Come Dancing: Melvin Odoom first to be voted off