The twins were pulled from the weekend's live shows. It came after claims that Josh sent threatening messages to an ex-girlfriend.

It was confirmed on Monday that the twins were leaving the show for good.

An X Factor spokesperson said: "Following the allegations relating to Josh Brooks, we have decided by mutual consent that Brooks Way should leave the competition."

Josh Brooks said: "Due to events in my personal life I've decided that it's best not to be on the show at this time.

"While not everything that has been claimed is true I would like to apologise to everyone involved."

X Factor host Dermot O'Leary said at the start of Saturday night's show: "Due to circumstances that have arisen, Brooks Way won't be appearing this evening."

A new group is expected to replace Brooks Way on the show in Louis Walsh's category. 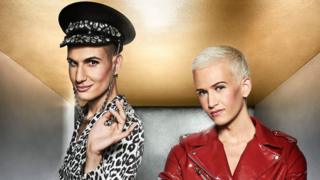 One of Louis's other groups, Bratavio, was the first act to get booted off the live shows.

The pair lost out to Saara Aalto in Sunday night's sing-off.