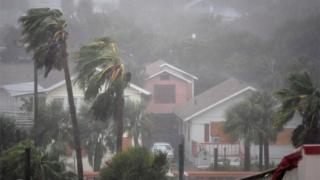 Hurricane Matthew has battered the Florida coast, in the US, leaving more than a million people without power.

The storm has not yet moved onto land in America, and has now been downgraded to a category two hurricane, as it continues on its journey northward.

Officials think around four people have been killed by the storm in America. 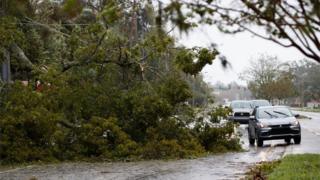 Getty Images
Strong winds have knocked down trees in Florida.

President Obama has warned people that even though the hurricane is starting to move on, it does not mean it is safe to go outside yet.

He is worried there might be a "storm surge" - a huge wall of water which rushes onto land from sea.

This is caused by a combination of low pressure inside the hurricane, and strong winds pushing the water onto land. 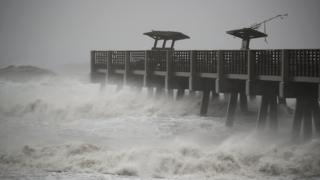 Getty Images
Hurricane Matthew has whipped up huge waves with its strong winds in Florida.

President Obama said: "I just wanted to emphasise to everybody that this is still a really dangerous storm."

Hurricane Matthew hit the country Haiti the hardest earlier this week, leaving hundreds of people dead, and without shelter or food.