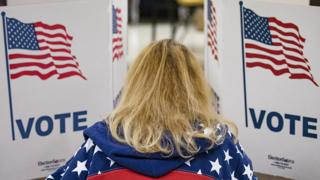 On 3 November 2020, millions of Americans voted for who they want to be their next president.

Stories about the US election are all over the news, as Donald Trump and Joe Biden have campaigned to win over the US public.

But there are a lot of complicated words and names being used.

Check out Newsround's US election dictionary below to find out what they all mean.

Want to know more about the US election?

This is a state where people will generally vote for the Democratic party - that is presidential candidate Joe Biden's party. 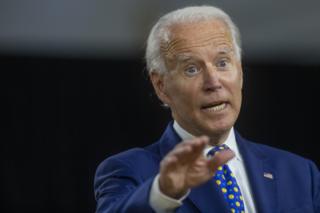 When people in the same political party go around the country and try to persuade people to vote for them, this is called campaigning. People who want to become president spend a lot of money doing this.

Joe Biden and Donald Trump have been campaigning for many months to persuade people around the US that they should be the next president.

This is a building in Washington DC where part of the US government lives, called Congress. Congress is made up of two parts that you will find in the Capitol building - the Senate and House of Representatives.

Traditionally, the inauguration ceremony which marks the moment that the president officially starts his or her new job takes place on the steps of this building, in January following the election. You can see a picture of President Donald Trump at his ceremony further below. 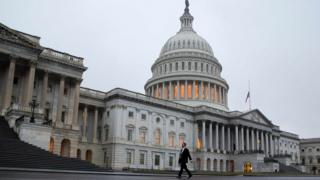 Reuters
The US Capitol building in Washington DC

A caucus is a type of meeting where members of a political party choose people, called delegates, to support the person they want to be the next president. People at the meeting openly show their support for the person they want, by talking or putting their hands up, like you might do in class. It is not done in secret, like a lot of voting.

These are held in around one in five of the US states (the others have different types of meetings called primaries) and take place in the first half of the year before an election.

This is a job which the president automatically gets meaning he or she is head of all the armed forces of the United States, including the army, navy and air force. 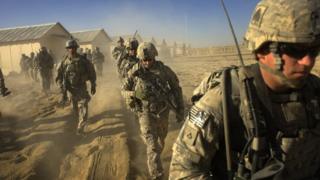 This is the part of the US government that writes and brings in laws, and also approves how much money the country spends. They can also do many more things, such as increase and decrease taxes, and declare war.

It is made up of two parts - the House of Representatives (435 people) and the Senate (100 people). Its home is the Capitol building.

This is the rulebook that everyone in America has to follow.

It was first made official towards the end of the 18th Century and most recently tweaked in 1992. 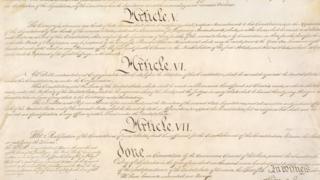 One of the two main political parties in the US. Joe Biden is representing the Democrats in his battle to become president.

A donkey is used as a symbol of the Democratic party.

The Democratic party is who Joe Biden is running for.

It is thought this was first used during a presidential campaign in 1828, after the candidate Andrew Jackson used it on his posters because of a nickname his opponents gave him.

A cartoonist called Thomas Nast later used the animal to represent the Democrats and it became a popular symbol for the party by the end of the 19th century. 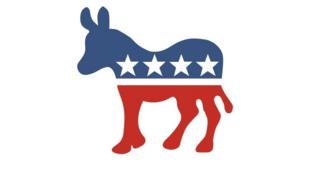 An elephant is used as a symbol of the Republican party.

Donald Trump is running for the Republican party.

It is thought it was first used like this by an Illinois newspaper during Abraham Lincoln's 1860 election campaign as a symbol of strength, although the exact reason is still debated.

It was then made popular after a man called Thomas Nast - who was a Republican - drew it in a cartoon in a magazine in 1874.

Out of the people who are competing to be president, the front-runner is the person who is in the lead and most likely to win. 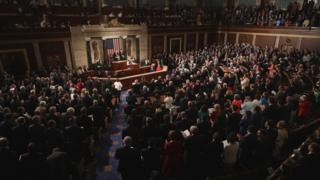 Chip Somodevilla
In June 2016, the Indian Prime Minister Modi spoke to the House of Representatives and the Senate, which together are known as Congress

The House of Representatives is one part of the US government that makes the laws, called Congress. The other part of Congress is the Senate.

There are 435 people in the House of Representatives (and 100 in the Senate).

Elections for the House of Representatives are held in states every two years. The number of representatives that each state has in Congress depends on how big it is.

This is the name given to the ceremony which officially marks the start of the president's time in the job. It takes place on 20 January following the election. 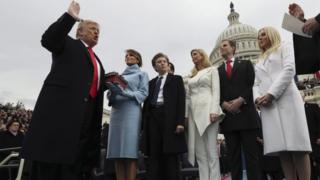 The large meetings of members of each political party, where they choose who will represent their party in the battle to be president. The Republicans and Democrats both suspended their 2020 national conventions due to the coronavirus pandemic.

A group of people with similar political views who come together to create one group, which is known as a political party.

The group generally has the same hopes and goals for how the country should be run.

There are two main parties in the US - the Republican party and the Democratic party. 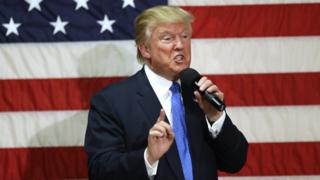 Associated Press
Donald Trump is a member of the Republican party

The president of the US is the leader of the country and perhaps the most powerful person on the planet.

We do not have a president in the UK because we are ruled by a different system, which means we have a Queen who is the head of our country, with the prime minister in charge of our government.

This is someone who wants to be president.

A primary is another type of meeting held within a state - like caucuses - at which people choose the person they want to represent their political party in the battle to be president.

The difference is the people at the meeting vote in secret for the person they want.

There are different types of primaries - open, closed, semi-open and semi-closed - which have different rules, depending on which state it is held in. 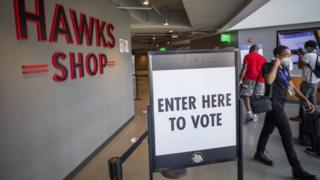 This is the same as a swing state (see below what this means). It is called this because the state could vote for either the Democrats, who are associated with the colour blue, or the Republicans, who are linked to the colour red. Red and blue mixed together makes purple.

This is a state where people will probably vote for the Republican party - that is President Donald Trump's party.

One of the two main political parties in the US. Donald Trump is representing the Republicans in his battle to become president. 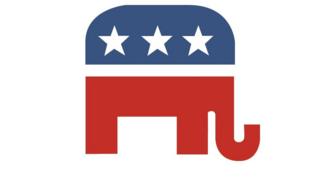 The person a presidential candidate picks to stand alongside them in their battle to be president. The running mate will become the vice-president if the person they are campaigning with wins.

The Senate is one part of the US government that makes the laws, called Congress. The other part of Congress is the House of Representatives.

The Senate has 100 members - two from each state. One is senior and one is junior, depending on the experience they have.

A member of the Senate is called a Senator and they stay in their job for six years. 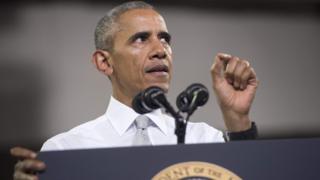 The US is divided up into different areas called states, a bit like we have counties in the UK. There are 50 states in total, which come together to form the United States of America.

Each state has its own rules on some things, while others are decided by the law of the whole of the US, which everyone must follow. This is what is called a federal system. 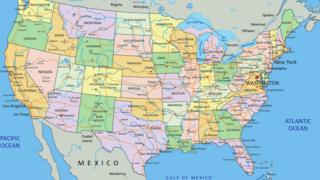 Getty Images
The US is divided up into 50 smaller areas, called states

This is a state which often changes the party it supports from election to election.

This is why they are so important to people who want to be president, as they are open to be persuaded! Some states have already their minds made up and no campaigning is likely to change that.

For example, the Republican candidate is unlikely to spend much money campaigning in a state that is going to vote for the Democratic candidate.

Swing states include Florida, Ohio, Virginia, Colorado, North Carolina, and Nevada. It might also be called a battleground state or a purple state. 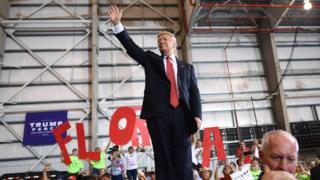 For the president, the term is the name given to the length of time they can stay in the job before the American people can choose someone new. A president's term is four years long.

A president is only allowed to stand for two terms - that is, eight years - before they have to step down and let someone else take over. 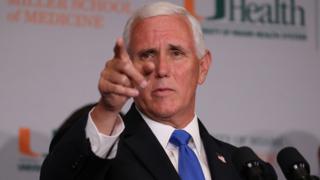 The person who is second to the president. They oversee the Senate and also would become the president automatically if the current president could no longer continue (for example, if they resigned or were killed).

They are also very close to the president so are seen as a close advisor.

Donald Trump: How the US president travels, and other cool ways leaders get around