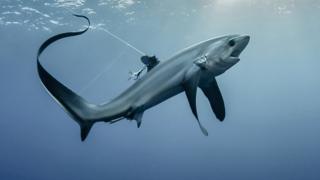 As many of you may know, a big meeting has been going on in South Africa to discuss the threats faced by wildlife around the world.

Jenny has been reporting from there as discussions are being had about how best to solve the crisis facing elephants and the threat of poaching.

But it's not just elephants under the spotlight, with decisions also being made about other species and how to protect them.

The thresher shark, known for it's long whip-like tail, is among a number of marine species given extra protection at the Cites meeting, along with silky sharks and devil rays.

"These are incredible animals, with their long whip like tails they're referred to as the Indiana Jones of the sea," said Luke Warwick with Pew Charitable Trusts.

"They stun the fish with their tails and can pick them up easily."

There are concerns that the thresher shark is being driven to extinction because of unsustainable trade and over-fishing - they are often found tangled in fishing lines.

The decision to add extra protection at this latest meeting was opposed by Japan and Iceland but it's hoped if this decision stands it will give these shark species a chance of survival in the long term.