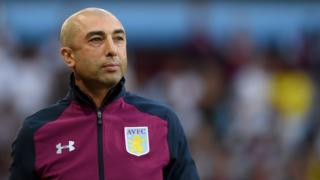 Aston Villa boss Roberto di Matteo has been sacked after just 124 days in the job.

His success rate was the reason why he was told to pack his bags - winning just one of his 11 games in charge at Villa Park.

The team were booed off by their fans after Saturday's 2-0 defeat at Preston.

A club statement confirming his exit said: "The club decided to act following a run of disappointing results."

It went on to say: "The club would like to place on record its appreciation to Roberto for all his efforts in helping rebuild the squad."

Villa were relegated from the Premier League last season and now sit 19th in the Championship.