One of the most powerful Atlantic hurricanes in recent years has ripped into the south coast of Haiti and the Dominican Republic, damaging homes with winds of 145mph.

Heavy rain and strong gusts tore roofs from buildings and caused widespread flooding to towns as the waves battered the coastline.

Around 10,000 people have fled to shelters for safety while southern coastal areas have been cut off from the rest of the country after the bridge linking the area collapsed.

There have been reports of overcrowded hospitals and shortages of fresh water with officials in the southern coastal town of Les Cayes describing the scene as "catastrophic".

Matthew became a furious Category Five hurricane late on Friday, but has since dropped to a Category Three. For more on Hurricane categories, click here.

The storm has been making its way steadily through the Caribbean, where many islands are on alert with people being told to stock up on supplies.

Jamaica started warning people to evacuate and prepare at the weekend. 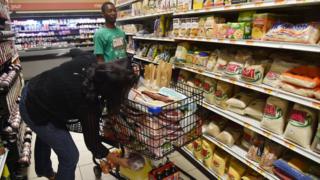 Despite the warnings, some islanders said "they would rather stay" to protect their homes.

While Jamaica felt some of the effects of Matthew earlier this week, with flooding in the capital, Kingston, it is Haiti that is suffering the main force of the storm.

The difficulty facing many Haitians is that thousands of people are still living in tents, following the huge earthquake in 2010, and there were already worries that this storm could be devastating for the country.

Officials said that about 1,300 emergency shelters have been constructed, enough to accommodate 340,000 people, with residents being told to move to shelters if they live in buildings at risk of collapse.

"No turning back now", said Minister of local Government, Desmond Mackenzie, "it is a matter of how long we have to wait this out."

Hurricane Matthew has now moved through the north-eastern coast of Cuba towards Florida.

Early reports suggest that Cuba has not been hit as hard as Haiti by the storm. 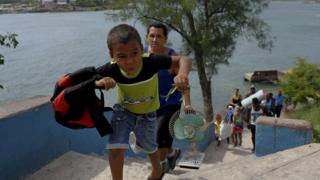 Hurricane Matthew: How Jamaica is preparing for the storm