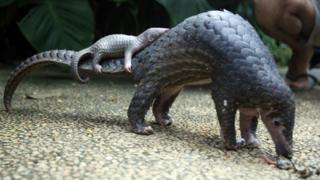 AP
A baby pangolin rests on the tail of an adult

The small and scaly pangolin has been given extra protection to save it from extinction.

They have been pushed close to extinction by poaching for their meat and their scales, which are used in traditional Chinese medicine.

Some people in China and Vietnam believe pangolin scales can cure certain diseases, but there is no evidence to support this.

The slow moving creatures live in Asia and Africa, and are nocturnal.

That means they come out at night to look for food and sleep in the day. 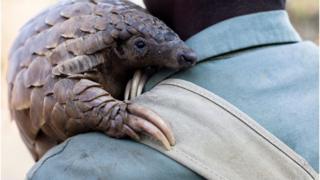 The new rules were agreed at the Cites meeting, an annual conference that tries to make sure that the trade of animals and plants around the world doesn't threaten their survival.

The 2016 Cites meeting in Johannesburg, in South Africa, has agreed to ban the trade of all pangolin anywhere on the planet. 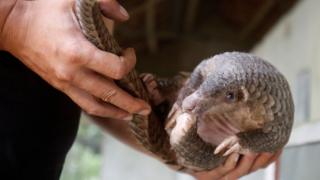 Ginette Hemley from the World Wide Fund for Nature said the new protection was "a huge win and rare piece of good news for some of the world's most trafficked and endangered animals".